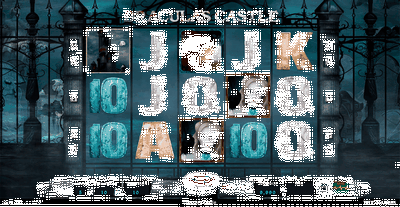 People don’t want to meet vampires, but they definitely like to watch movies and shows and play games featuring these creatures. Dracula’s Castle is an online slot game by Wazdan with a theme like that. It’s a new game with powerful graphics and great features.
Graphics & Theme

The castle where count Dracula lived hides many secrets and it served as an inspiration for many legends. With this online slot you can reveal some of these secrets and mysteries. As a new slot game, Dracula’s Castle features stunning graphics where blue flames and dark colors dominate. We really like the gothic gate in the background of this game.

Dracula’s Castle is played on a matrix that consists of 5 reels and 5 paylines. The standard card values from 9 to Ace are present in this game too, but there are some unique main symbols too like some graves, bars and a few female vampires.

Dracula himself is a wild symbol. In addition to its power to replace other main symbols it can also expand and cover the whole reel. In fact, it can expand over all reels.

A wall that consists of matching symbols will provide different multipliers to players. Another thing that makes Dracula’s Castle special is the gamble feature. This time, players that have won a turn can choose one of the few goblets held by an attractive female vampire. Obviously, you can double or lose your last prize.

If you like innovative features, impressive graphics and animations and new slots in general, don’t hesitate to try Dracula’s Castle.