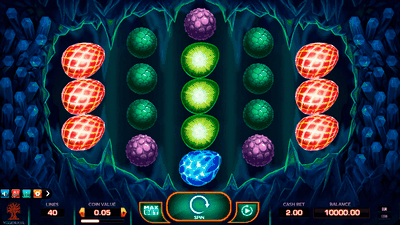 Yggdrasil Gaming are an online casino developer who have pioneered unique slots bonus features over the past few years. Double Dragons features some cool progressive multipliers, Cascading Reels, and free spins. Chibeasties 2, meanwhile, allows players to enter one of four realms with special Wild symbols galore.
Mashing up a little of both is the Draglings casino slots. It’s a standard 5-reel online slot on the face of it, but there are exciting Expanding Wild symbols to be had and a top jackpot worth 30,000 coins. Oh, and the dragons have made a return and brought their babies along with them. If you’re a fantasy fan, you might want to read on.

Draglings is an interesting 5-reel online slots game that is played on a staggered honeycomb set of reels. The reels go in a 3-symbol/4-symbol/5-symbol/4-symbol/3-symbol formation, yet there are only 40 paylines to hit overall. All paylines come fixed and it’s ‘win both ways’. That means 20 run left to right and 20 run right to left.

Coins can be set at just 0. However, there’s a high limit bet of 1. Most symbols appear stacked, which can make for some big wins. However, it’s still an effort to land anything meaningful, whatever your stakes.

The high limit icons are the more visually spectacular eggs which are more volatile. These range from a sparkling lemon egg (10-300 coins), a neon pink one (15-400 coins), and a bright blue egg (20-500). The top payer is the fiery orange egg which dishes out a jackpot worth 750 coins.

Like Yggdrasil’s science-themed slot, Cyrus The Virus, the middle reel usually comes to a stop last. There’s a good reason for this: a giant purple dragon can spring up from a baby Dragling to fill the whole reel. It’s a rare expanding Wild beast but a great icon to land.

Draglings casino slots has a neat free spins bonus round. It’s triggered by landing three or more FREE SPIN Scatter symbols anywhere on the reels. Initially, gamblers can earn 10, 20 or 75 free spins (for 3, 4 or 5 Scatters). However, during the feature you can retrigger more spins by just hitting at least 2 Free Spin Scatters.

This is where things get interesting. The bonus game is packed with Wild symbols to give the player even more chances to bag winning combinations.

Draglings can be a little high on volatility, so you’re really banking on stacked symbols on Reels 1 and 5 to get things off and running. The Wild Dragling took a LOT of spins before it appeared, and the Free Spins feature was elusive enough to remind you you were in an Yggdrasil slot.

Still, with some slick mobile-optimised play, nice graphics and music, and a big jackpot, there’s enough to warrant giving the game a play for free before committing.