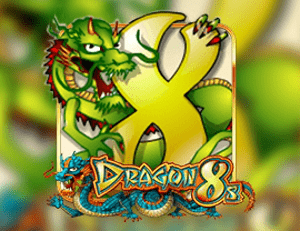 One of the more visually pleasing Asian-themed slot games, Dragon 8s features a couple of fun bonus features that can result in big wins. It has 20 fixed paylines set over 5 reels.

Slots with Asian themes have long been popular with slot players with the likes of Choy Sun Doa and 5 Dragons being 2 of the most played Las Vegas slot games for a number of years now.

The reels in Dragon 8s are tucked inside a lovely golden pagoda set against a landscape of purple mountains and rolling green hills. Chinese music opens the game and blares out when you hit a winning combination.

The game’s lower-value symbols are all represented by the lucky number 8, in different colors and each entwined with a different style of Chinese dragon. They rank according to value, from lowest to highest: purple, red, turquoise, orange and yellow.

Four high-valued symbols represent four creatures that feature heavily in Chinese legends and stories, beginning with an orange koi goldfish. Next up is a crane with its wings spread open, then an adorable symbol features a wild panda against a patch of bamboo. The highest value is the turquoise and orange dragon’s head.

Dragon 8s features a standard wild symbol that is adorned with the word “Wild” atop a blue ancient Chinese mask. It will substitute for any symbol to help create winning paylines, except for the fan scatter and the lantern free spin icon. Land one or more scatters to earn a 2X multiplier, as well as a separate bonus coins.

The scatter symbol is decorated with an open golden fan and is used to award bonus coin payouts determined by the number of credits you bet on that spin, up to 200 if you land 5 at once.

A bonus mini-game is included for your winning and playing pleasure. To open it, land 3 or more glowing red lantern bonus symbols anywhere on the reels. You’ll then be taken to a pretty scene on a Chinese street that has lanterns strung across it. Click on one of the 6 lanterns to see how many free spins you’ve won – anywhere from 4 to 7.

The lantern will then break open, dropping 6 coins onto the pavement. Choose 1 of the coins to see the multiplier attached to your free spins. This will be at least 3X, but could be as high as 6X. After making your selections, the free spins begin, and when they’re completed, you see your total bonus won.

Not a Game for Small Stake Players

When you first open Dragon 8s, you’re presented with two choices for coin values in your game. Click the first option to play with coin values of 0. Click the second option to play with simply 0. With option one, your maximum bet is 50. In option two, your maximum bet per spin is 20. With both options, the lowest you can wager on a spin is 2. So low stake slots fans might want to stay away.

One of Amaya’s Stronger Titles

If you don’t mind betting a little bigger then Dragon’s 8 is a really fun game. If you don’t normally bet big, then try the free to play version of the game above. If you are comfortable with the game’s volatility, then you can try it out for real money.