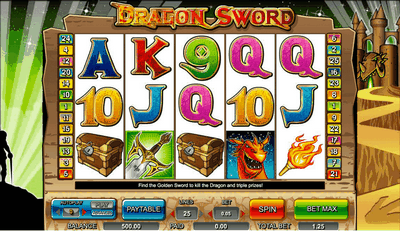 These Dragon Sword mobile slot, with its 5 reels and 25 pay lines, captures everything we love about the magical and the medieval
and then adds tripling wilds, retriggering free spins, scatters towards features and bonuses, and a jackpot worth 6,000 coins!
Don’t let the simple graphics fool you
Dragon Sword slots game is packed with enough adventure to fulfill King Arthur and the entire round table.

While you’ll automatically be watching for the Knight wild and the Sword scatter, also keep a weather eye out for the dragons, which reward pretty handsomely if you can get them to line up on a pay-line.

Select coin amounts from 0.
making the minimum bet as low as .01 and maximum bet as high as 125.00 credits per game.

All symbols in Dragon Sword online pay from left to right, including the Sword scatter. For the most part, you’ll need at least three consecutive symbols to win.

The Knight symbol is the wild.
He substitutes for all symbols except for the scatter symbol.
The Knight appears on all reels. The Free Game Feature is triggered when he appears on Reels 1 and 5.
Most importantly, the Knight triples every winning pay line he touches.

The Sword is the scatter symbol.
Scatters appear anywhere on the five reels.
You’ll need two or more Sword symbols to appear for a pay out.
Three or more Sword scatters activate the Dragon Sword slot machine.

The Free Game Feature is activated when the Knight appears on Reels 1 and 5.
15 free spins are awarded in which all prizes are doubled.

The Dragon Sword Bonus Feature can be triggered during the free spins.

Three or more Dragon Sword scatter symbols trigger the Bonus Feature.
A new screen will appear, revealing a dragon who has taken the Knight’s swords and hidden it in one of five treasure chests.
You, as the Knight, have three chances to select a chest and find a sword.
Each time a Sword is found, a random prize is awarded.
If the Golden Sword is found, all prizes are tripled and you can watch the Knight kick some hot scaly behind.
As with the free spins feature, all prizes are multiplied by the initial wager.

Like most of Cryptologic software games, Dragon Sword slots is highly entertaining and features some nice player options
like variable speed of play, a separate screen pay table window, and surprising animations.