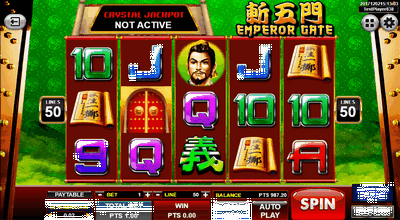 Emperors around the world throughout history were living in palaces with spectacular gates. Emperor Gate slot games is an Asian-themed online slot game designed and developed by Spadegaming. When it comes to graphics, this online slot features nice visuals that are not very detailed but come in shiny colors. The background includes the gate and decorated green image.
Emperor Gate has 5 reels and 50 paylines. As for the standard symbols in this online slot, expect to find six playing cards as well as four unique symbols – a scroll, a pot, a young guy and a green Chinese symbol. As you may have expected, the emperor himself is the wild symbol. This is the symbol that replaces missing standard symbols on the reels. It shows up on the second and fourth reel and it expands and covers these reels. When it’s part of a winning combo, this symbol multiplies the prizes by two. There’s also a gate symbol which is actually the Scatter. Landing at least three of them on the reels will start the Free Spins round where you can win a jackpot prize at random.