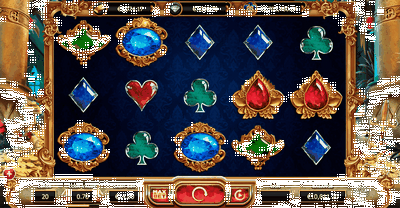 Empire Fortune online is a slot machine present in online casinos. It has been published since October 2016 by the gaming provider Yggdrasil. Jewels and precious stones shine brightly on this machine with progressive jackpots.

The payout rate to Empire Fortune players is 94.

The different symbols of Empire Fortune

There are 10 different symbols that can appear on the grid :

The different connections in Empire Fortune

Many connections are possible on Empire Fortune. It is necessary to align between 3 and 5 symbols from left to right to obtain a gain.

When 3 or more Bonus symbols land anywhere on the reels, the Bonus Jackpot Wheel function is triggered. Bonus symbols each give a spin on one of the wheel’s tiers, from lowest to highest.

Finally, the Hold feature can be triggered during the basic game as well as during free spins. If only 2 Scatter and/or Bonus symbols appear on the grid, the reels containing these symbols will freeze for the next spin. During the free spin bonus, this feature also grants an additional free spin.

Our opinion about Empire Fortune

It is thanks to its progressive Jackpots that Empire Fortune mobile slot makes the difference. While its graphics remain fairly classic and its RTP below average, Yggdrasil ‘s machine is known for its high earning potential and the multiplicity of possible rewards, especially when the Jackpot Wheel offers great suspense. One can nevertheless regret the absence of WILDs symbols and the low interest of the basic game.