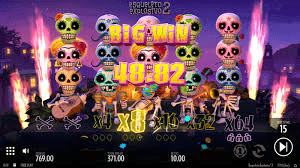 Even though Thunderkick is a relatively new and small game provider compared to the other big fish in the industry, the creative geniuses behind the Swedish based company have proven that they are able to think out of the box. For the guys from Thunderkick, coming up with creative concepts to develop stunning slot games is second nature. The Esqueleto Explosivo slot machine was first developed for PC only and later debuted as Thunderkick’s first mobile slot.

It’s far from anything, but your typical slot machine. The Esqueleto Explosivo slot machine features the extremely popular cascading reels feature. The Mexican sugar skulls themselves make up the five reels and explode every time you score a winning combo. New sugar skull symbols drop down to replace the old ones which ultimately increases your chances to score even more winning combinations. The cascading reel mechanism makes your winning opportunities in Esqueleto Explosivo slot games a never-ending fiesta.

Give this hilarious fiesta slot game a spin for free or play in real money mode and spice up your bank balance with mucho moolah. You’ll have a head rolling time with these ancestors.