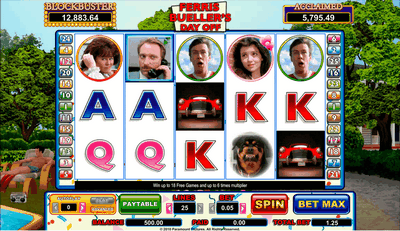 When Ferris Bueller created an elaborate plan to get out of school for the day, he takes his dad’s ferrari along with his girlfriend to Chicago. Now you can relive this 1986 comedy in the new 25-payline Ferris Bueller’s Day Off slot machine by WMS, available for free slots play at Slotorama.

In this game, you’ll be set up in Ferris’ backyard around the pool. It’s a perfect day for playing hooky at school with blue skies and bright green trees. On the reels you’ll find all of the great characters from the film including Ferris, Sloane, Cameron, Principal Rooney and more. If you’ve seen the film, you might also remember certain scenes once you see other symbols like a rottweiler, a ferrari and the Save Ferris!

Day Off Wilds – The Game’s logo is the wild and appears on reels 2, 3 and 4. It will substitute for near every other symbol in the game except the Scattered badge to complete winning combinations when possible.

Save Ferris! Scattered Badge – The Save Ferris Badge symbol offers scattered rewards for symbol hits of two or more anywhere on the reels but additionally if you land three or more in a spin you’ll earn the Fake the Parents Feature!

Fake the Parents Feature – Land three or more Scatters to trigger the Fake the Parents free spins feature. You’ll press keys on the keyboard to build your number of free spins and your free game multiplier is then shown as Ferris reduces his “Days Absent”.

Kick the Car Feature – Trigger this bonus when you land the car symbol on reel 2 and Cameron on reel 4 at the same time. Press Go for Cameron to start kicking the car with each kick increasing the speedometer. The triggering bet is multiplied by the speedometer value.