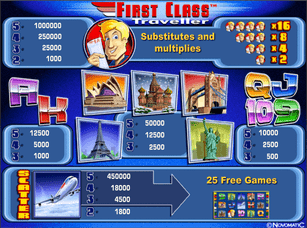 We’ve all been guilty of boarding a plane to set off on holiday only to find ourselves glancing in envy at the more privileged travellers who are escorted to the first class section where they enjoy glasses of champagne and much more comfortable seats with extra leg room – and now you have the opportunity the life of a first class traveller!
Prepare to experience a world tour thanks to Novomatic as you take in the sight of famous landmarks around the world which see you in London with your umbrella up as it pours down, chucking a boomerang as the sun beams down in Sydney, sipping on champagne in the snow in Agra, wearing a beret and munching on a baguette in Paris, and in New York driving an open top car along the highway with hot air balloons rising into the sky – oh it’s a hard life!

Designed in the style of a traditional slot machine that you’d have found in pubs before Fixed Odds Betting Terminals took over, the First Class Traveller casino slots consists of 5 reels with 9 paylines which can be adjusted (with 1, 3, 5, 7, or 9 to choose from). Your ticket price will vary as you can adjust the coin values to take your seat on the flight from 1 coin up to 900 coins, and it’s well worth it as you’ll be enjoying Wild multipliers worth up to 16x the prize and there is also a high-flying free spins feature where you can sit back and sip of champagne as you spin the reels for free 25 times!

Those who travel in first class are waited on hand and foot therefore it should come as no surprise that you (well, the cheeky blonde chap who represents you on the reels) is the most valuable symbol of all on the reels.

Not only is he worth the most as five on a line results in a massive win worth 10,000 coins, he is also the Wild symbol with the ability to substitute for all but the Scatters, and when he features in a winning combination you’ll be enjoying the prize being multiplied with him appearing once bring a 2x multiplier, twice and it’s a 4x multiplier, showing up three times brings a 8x multiplier, and greeting you with his presence four times in a winning combination sees the prize multiplied by 16x!

Visit Landmarks Around the World

You’ll have a jam-packed travel itinerary as you travel the world with many world famous landmarks to visit and take photographs at as you are jetted from one country to another in your 1A first class seat.

There are five different landmarks which feature as symbols on the reels which are the Eiffel Tower, the Sydney Opera House, London Bridge, the Taj Mahal, and the Statue of Liberty, and they all have the same values as three, four or five of each on a payline will result in a win worth 25, 125, or 500 coins respectively.

The aeroplane which you are jetted around in is the Scatter symbol with instant Scatter wins to enjoy when two or more land on the reels at once, plus three or more trigger the free spins feature, and there are also Ace to 9 playing card icons on the reels as the least valuable symbols of all.

It’s a hard life flying around in first class seats but you’ll certainly get used to it when you see the aeroplane land on the reels two or more times at once as it sees you well rewarded. The aeroplane landing twice sees you enjoy a win worth 2x your stake, however you’ll be hoping three or more touch down at once for a combination of Scatter pays and free spins.

Three aeroplanes see you win 3x your stake, four and it’s 20x your stake, while you’ll need to be in the right spot at the right time to witness five aeroplanes landing at once for a win worth 500x your stake, but on top of these great rewards you also trigger 25 free spins which can be retriggered – let’s hope your world tour continues!