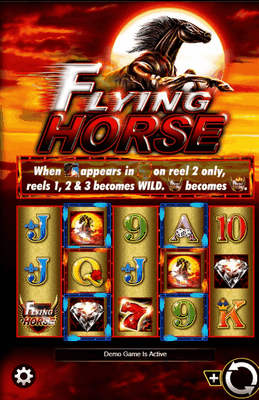 Conjuring up a flavour of the American West, Flying Horse slot review is a 5 reel, 100 payline slot from Ainsworth. It comes with wild reels, wild reel re-spins and a bonus feature that awards 8 free spins on a giant 5×9 reel set. Take off from between £1 and £100 per spin.
Flying Horse is a bit of a mixed bag as far as visuals are concerned – it has the look of a classic brick and mortar slot. Joining the A to 9 playing cards are a river and canyon scene, a diamond, a silhouetted horse, a lucky 7 and an eagle. There’s also a standard wild.

Flying Horse casino app comes with a Free Games feature which is triggered by landing 3 or more scatters on the same spin. You’ll then be awarded 8 free spins which are played out on a giant 5 reel, 9 row machine.

You can trigger the Wild Re-Spin feature with different reels turning wild depending on where the horse symbol lands. As in the base game, multiple reels can turn wild here, which is even more impressive given the 9 row set up. You can re-trigger more free spins here by landing 3 or more scatters anywhere on the reels – it will give you 5 extra free spins every time it happens.

This game is a bit of a mess – part fruity, part video slot, the theme is neither one thing nor the other. That in itself doesn’t really matter if the features are good. The wild extras on offer here are impressive enough but it’s pretty complicated trying to remember what position does what. Best to just hit autoplay and leave it to take care of itself.

We found Flying Horse online slot a frustrating game to play. Get lucky with the wilds in the bonus feature though and the Flying Horse can help you gallop of with plenty of treasure.