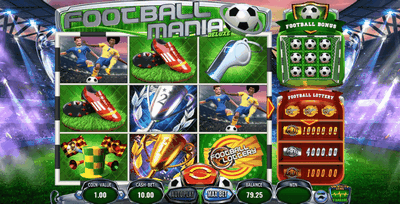 Wazdan’s Football Mania Deluxe casino app for the football fans out there who want to experience the fun of football in a unique online slot! There are several unique features like the Football Lottery, Football Bonus, and block symbols too.

Football Mania Deluxe has a very classic setup with three reels and three rows. There are no paylines as wins are simply awarded for combinations of the same symbol. Like many Wazdan slots, you can expect a themed gamble feature and the unique Volatility Levels feature where you get to customise the slot by choosing the volatility level that suits your preference.

To get started, you first need to place your bet by choosing the coin value. Then, choose your preferred volatility level between low, standard, and high, and then you’re ready to get the match started.

If you’re a low roller who enjoys plenty of action on the reels in the form of frequent, but smaller wins, low volatility is perfect for you. If you’re aiming for bigger prizes, high volatility mode is a great option, but the wins won’t be as frequent as when you’re playing in low volatility mode. You can find the volatility settings at the bottom of the screen in the game panel.

Every time you win a prize in the main game, you can either collect it or gamble it in the gamble feature. If you choose to gamble it, you will be taken to a separate screen where you can see the football stadium with the goalkeeper in the middle. You have to choose to shoot the football from the left or the right. If the ball goes into the net, you will double your prize! If the goalkeeper catches it, you lose your prize and the gamble feature will end.

After every spin, the reels will automatically block the best set of symbols into place (you can also change which symbols are held in place). On the next (paid) spin, this could lead to a winning combination.

The Football Lottery Bonus is activated when football lottery tickets land on the three middle reels (and you collect the prize rather than gambling it). You will then get to choose one of three lottery tickets to reveal the prize!

Winning combinations occur when you get four to nine identical symbols on the reels. The highest paying symbol on the reels is the football, paying between 15x your bet to 500x. The gold trophy is worth a minimum of 10x and a maximum of 350x your bet, followed by the silver trophy which comes with payouts ranging from 10x to 250x your bet. The bronze trophy is worth bet multipliers ranging from 60x to 200x. The football player then pay sup to 180x your bet whilst the symbol with both football players is worth up to 150x. The referee is the last high paying symbol and he is worth up to 120x your bet.

Football Mania Deluxe is set right in the middle of a crowded football stadium, with bright green turf at the bottom and a massive crowd surrounding the field. You can see bright lights flashing on the stadium and crowds cheering loudly and waving flags to support their favourite team. On the right, you can see the Football Bonus matrix whilst underneath there is the Football Lottery. At the bottom of the field you can see the game panel with all the game controls like the bet settings and Volatility Level settings, as well as access to the paytable.

Football Mania Deluxe is the ultimate slot for football fans, featuring football themed bonuses and great graphics that really put you into the atmosphere of an exciting football match. You have the opportunity to gamble your wins in an interesting and interactive gamble game as well as the option to change the volatility level.