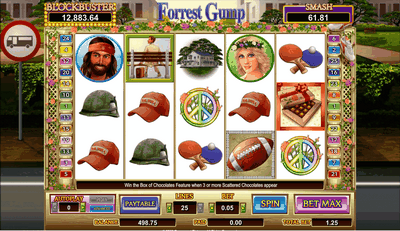 If you’ve ever watched the movie, you’ll immediately

recognize many of the symbols in this 5 reel, 25 pay line slot.

make appearances on the reels.

Jenny and Lieutenant Dan both look pretty recognizable
compared to the actors, but one gripe we have is that Forrest
Tom Hanks.
for a second before realizing that the man in the white suit is
The following comparison highlights our point.

Moving on, you’ll also see a wild symbol, which is Forrest
sitting at the bus stop, and a box of chocolates scatter symbol.

The bus stop symbol only appears on reels 2, 3, and 4, and it
substitutes for everything other than the box of chocolates. The
scatter multiplies payouts by 2x for 2 symbols, 5x for 3
symbols, 15x for 4 symbols, and 200x for 5 symbols, when it
lands anywhere on the reels.

Do you remember the Forrest symbol we just complained about?
It’s the highest paying symbol in this game, and it delivers
Forrest’s on a pay line.
this with the 200x scatter and you’ll receive the top possible
win of 1 million credits.

The background in this game is pleasant to look at since it’s
a grassy suburban area, presumably where Forrest is waiting for
the bus. The animations are also pretty good since you see
things like the football spinning, and the chocolate box opening
with chocolates bouncing around.

Forrest Gump’s sound effects, for the most part, add
something to the game. For example, a college band plays when
you get a winning combination with the footballs.

However, one small complaint we have is that there’s no music
playing when you spin the reels. So it gets kind of awkward
during the game until you finally hit a winning pay out. This
problem is compounded when you only play five or less pay lines
and don’t score as many wins.

One more aspect that we don’t like about Forrest Gump bonus is the
slow reels. It takes around four seconds from the time you begin
spinning the reels until they stop. Even worse is that there’re
no options to either stop the reels or turn up the speed.

On a positive note, you’ll have access to plenty of betting
options on this slot machine. Aside from changing pay lines from
1 to 25, you can change coin size from .01 to .00.

You can also use an advanced tab to change standard betting
options as well as set win / loss limits for yourself. The
latter feature has been incorporated into many of Amaya’s newer
slots to help with bankroll management.

If we were to pick one thing to love about Forrest Gump mobile slot
more than anything else, it’s the fact that there are two second
screen bonus rounds available. Below you can see an in depth
look at each one.

When you land three or more box of chocolates anywhere on the
reels, you trigger this bonus round. It begins with you opening
boxes of chocolate from the nine available boxes.

The goal is to get as many free games for the next round
Start.
Once you find the box that begins the bonus round,
you’re taken to another screen with 3 reels shaped like the
inside of a chocolate box.
The reels spin automatically, and you win prizes based
on how your combinations correspond to the left hand pay
table.

When your free spins are up, all prizes earned during this
game will be multiplied by your original bet. Unfortunately, you
can’t re-trigger free games at any point during the bonus round.

If you get 3 or more football symbols anywhere on the reels,
Run Forrest Run bonus game.
inventive for two reasons in that it combines one of the movie’s
more famous sayings with Forrest Gump’s college football career
University of Alabama.

The goal is to help Forrest make it down the football
field as far as possible without being tackled.
You use the left and right arrows to control Forrest and
avoid his pursuers.
You’ll receive a prize for every 10 yards you make it
down the field.
You can also earn a touchdown payout for guiding Forrest
to the end zone.

The interactive element and unique football setup on this
slots game makes us not only think that this is the game’s best
bonus round, but also one of the top bonuses that you’ll find on
any slot machine.

A final point worth making here is that, when compared to
other Amaya slots, both of these bonus games seem to come up
quite frequently.

Yet another frill in Forrest Gump online the Hollywood
jackpot. This is a linked progressive jackpot that can be found
in other Amaya games, and it’s awarded randomly rather than
through specific winning combinations.

Theoretically, you can hit a Hollywood Jackpot on any spin,
regardless of if it wins or loses. But your chances of winning
the jackpot increase as you wager more money.

The Hollywood Jackpot actually consists of different levels,
including the smallest called Smash, Epic, Classic, Acclaimed,
Blockbuster.
be eligible for larger jackpots by revealing film clips
throughout the game.

We have to say that the majority of older CryptoLogic games
don’t really measure up to the newer 3D slots that are available
today. But just like the movie, Forrest Gump slots seem like a
timeless classic that will remain relevant, despite being
developed in 2009.

The graphics and animations are good enough to help Forrest
Gump hold its own against new slots while both bonus rounds
really add a lot to the equation. We especially enjoyed the
football bonus round and helping Forrest advance down the field
towards a touchdown, although we never actually scored.

The fact that you can also play for a 5 level progressive
jackpot is another factor that makes Forrest Gump a complete
game.

However, this slot is definitely not without its faults.
biggest complaints we voiced earlier include slow reels, a lack
of music during spins, and the fact that Forrest Gump looks
Forrest Gump.

But overall, these are rather small inconveniences to what is
a very good slots game. And considering that it’s readily
available at many online casinos, you’ll have no trouble playing
Forrest Gump slots.