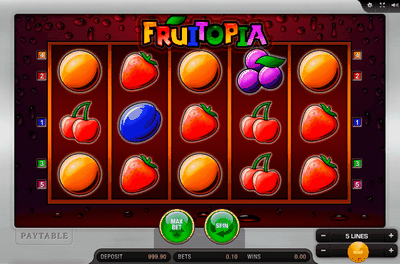 Indulge in the fruity madness and see what the joker offers
The layout in Fruitopia casino app is fairly simple and doesn’t differ from that in most other online slot games. It features the regular 5 reels and 3 rows. The total number of available payline is rather humble, though, at only 5. But seeing as this game is after the old school slot machine feel, it’s only fitting for there to be less paylines. In addition, they are also not fixed, so players will have the freedom to regulate their number. Thus, you can also play with as few as only a single paylines, if you so choose. Then again, stakes here are pretty satisfactory, ranging from only 1c per spin up to the maximum of per single spin. You can adjust your wager amount, together with the number of paylines you would like to bet on, directly from the game lobby. You will find the respective controls just below the reels in the right corner.

Now let’s have a closer look at the game’s symbols. First in line are the lower value cherries, together with the rarer strawberries. Moving up, we have the plums, lemons and the orange symbols. And that increase the value further a notch for the grape and watermelon symbols. But that’s not everything just yet. Besides all the traditional fruit symbols, the developers have included a slightly less likely character here – the joker. He is the most lucrative symbols on these reels, enjoying a dramatically higher value than the rest of the icons here. But not only that, the joker also acts as a Wild symbol on these reels. This means that it will be able to replace any of the other symbols present to help create winning combinations. And better yet – it will have no competition, meaning there are no symbols that the Wild won’t be able to substitute for.

Random features and other extras

With the above in mind, you have probably realized that there is no Scatter symbol in Fruitopia. There’s also no Bonus symbol or anything of the sort. So, this means you won’t be able to enjoy any freespins or pick me games, as is often the cases with online slot games in this genre. Nevertheless, the developers haven’t completely forgotten about the element of fun. Therefore, you will instead be able to benefit from a random multiplier on any of your wins. That’s right, every time you spin a winning combinations, you may be able to gain a multiplier on your prize. The value can be anything of the following: 2x, 3x, 5x or up to 7x. So this should pretty much just be great news altogether. And the fact that potentially any win can be subject to one of these multipliers makes gameplay all the more exciting and all the more rewarding.

But what else is there in store? Well, this wouldn’t be a proper Merkur online slot game if there weren’t a Gamble feature. And a Gamble feature there is, indeed! And as in a great number of other slots by this developer, it happens to consist of two separate side games. You can choose which one you would like to access after any spinning. So, on top of the multiplier we already mentioned, you will get the chance to further increase your prize. You can play the simple ladder game or engage in a game of playing cards. The latter requires you to guess the correct color of a card. Both side games are double or nothing, so be sure to watch out for your winnings.

What are other games similar to Fruitopia?

You might be interested in trying new online slot games that will provide you with a close feel to something familiar. So, if you liked Fruitopia, then what should your next game of choice be? We can offer you a couple of suggestions to make the search a bit easier. One of them is another slot by this same developer – Fruit Slider. This online slot game will provide you with a very similar feel, in terms of the theme and even the setup. The only thing it lacks, though, is a Wild and a multiplier. Or you might like Sizzling 6 by developer Novomatic. It even has the same concept of fruit symbols and a joker as the Wild. In addition, there are no freespins, no multipliers, but still plenty of possibilities to win big.

Fruitopia Fruitopia slot visuals and pleasant overall feel. The lack of freespins is customary for slots in this genre, so if you know what it’s about – there won’t be much disappointment. It’s a medium variance slot game, with a satisfactory winning potential and a nice touch with the multipliers.