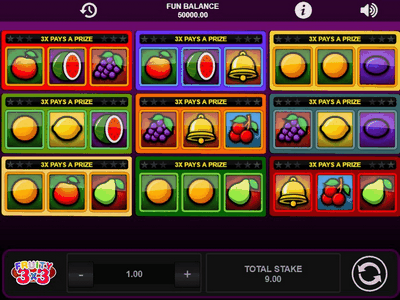 Fruity 3×3 consists of nine different slot games, each with one pay line.
About Fruity 3×3

Fruity 3×3 is not your stereotypical game, as it is made up of nine individual slots that are each made up of three reels and one pay line. These games appear on the screen in a 3×3 formation and consist of traditional fruit symbols, hence the games name.

The symbols in the game include

The music was extremely bright and cheerful, and you can hear birds singing loudly in the background.

Players can choose how many of nine games they would like to use on each spin.
The minimum amount you can spend per spin is .

To pick up a win on any of the nine individual games, you simply need to match three of the same symbols across one of the games pay lines. You can pick up multiple wins from one spin, which will each be added to your total.

Whilst playing we found that the upper three games tended to pay out smaller prizes more often, with the bottom three games paying out the larger cash prizes. However, we found these harder to hit. We liked that you could choose to turn off some of the games by either clicking on them or by selecting one of the pre-determined game patterns at the top of the game, next to the logo.