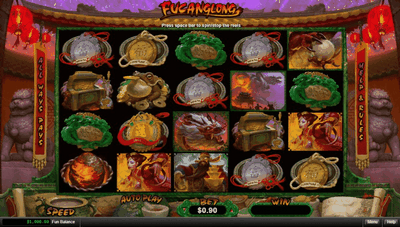 Game setup for The Fucanglong Slot

This is a game which is packed with visual effects and as such, it’s a relief that the game setup for the Fucanglong mobile slot very simple indeed. This is an all ways pay game where wins form from left to right in sequence across the reels. You don’t have to hit a specific pay-line, any symbols along the 5×4 reel grid will grant you a win. Bet sizing is therefore always a total stake. Your options start at 0. This low max bet will disappoint many high rollers but will be enough for the wide majority of slots players.

Whilst high stakes players might be a little put off by the low max bet, the game does make up for it in gambling action with a generous RTP and a volatility level that appears to be well north of medium on the Fucanglong slot. It’s not the most dangerous game out there but the risk of the Fucanglong slot games catching you raiding his treasure trove certainly has potential to hit your bankroll. On the other hand, escape with the gold and all will be well!

Control wise everything is pretty stock, you can spin manually or automatically with various settings to control bankroll in auto mode. The ways the slot pays in sequence, in case you forget, can be accessed by a bar at the left side of the reel and the pay-table by the corresponding bar to the right. There’s also a nifty little speed control which has been brought into the theme with joss sticks in a bowl, simply light more of them to spin the reels faster.

Gameplay and Theme for The Fucanglong Slot

A frequent complaint of ours on many slots is that they make too much use of stock playing card icons in the visuals and casino jingles in the audio. Rather than making full use of the theme. The Fucanglong online slot all this and then some. In fact, it might go a little too far. There isn’t an inch of space on the reel backdrop or reels which isn’t dominated by complex images of the far-east. We think it looks spectacular and the music and sound effects are great. Some players however, might find it a little fussy, especially on the small screen when playing on mobile.

Using the theme of ‘8’ being a symbol of wealth, 5-of-a-kind combinations of almost everything pay very well. The main pay-table symbols unfortunately though, all share the same curse. Anything less than 5 symbols pays out very weakly indeed. The wild is also fixed and has no scatter prize of its own in play. You can hit big wins in the base game but, it’s unlikely, the way this slot can pay big is all in the bonus feature games.

The Fucanglong Slot has two very different free spins features on offer. Triggering the most common, the dragon mountain spins, requires 3 or more scatters which also have a credit award. Only the top one is really of note – being 88x the total stake. You get 8 free spins and any re-trigger increases the games by three and ups the win multiplier by x1. The Fucanglong is an entertaining expanding wild in this feature and you can get good prizes here. Nothing though, like the second feature, which we found to be filled with hoarded dragon’s gold.

Three or more of the dragon’s pearl scatters open the second feature. The instant reward is much bigger here – with up to 888x the total stake for all five scatters. A mystery pearl sits above the new reel set and has a hidden value of between x3 and x88 the triggering bet – it’s revealed at the end of the spins. If you don’t hit the game well with your first eight spins, and the total win is less than the revealed pearl prize, you open a secondary feature called simply ‘Fucanglong’. Here, extra spins are awarded until your total win exceeds the original pearl value. What makes this so rewarding is that on each extra free spin the pearl value increases by between 1x and 8x the triggering bet – it can progressively rise all the way to x888!