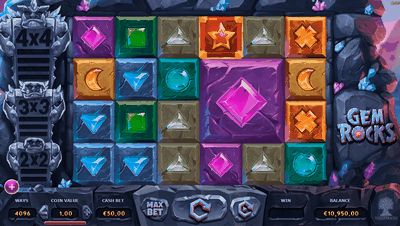 Visually, Gem Rocks slot looks amazing – as do all slots from Yggdrasil Gaming to be fair. Set in a world made up of stones and gems, it features gentle gem-hearted giants! Set on a rocky and mountainous terrain, this fast-paced game is exciting and has an epic feel to it. Symbols on the rules include 8 regular stones/gems – the most rewarding is the star which gives you 75 coins for 5 in a cluster.
When you get a winning combination, you will trigger the Dropdown Wins feature – the contributing symbols disappear from the screen which leaves room for new symbols to drop down. The new symbols keep on coming as long as you keep getting winning combinations.

The main attraction of the slot is the Gem Rock feature – this is activated when you get 2, 5 and 9 consecutive Dropdown Wins. You can keep track of your progress with the gem rock meter on the screen. Once triggered, a single Gem Rock lands on top of the reels – this is constructed from identical symbols.

Basically explained, Gem Rocks online slot fall which display the same symbol – this allows you to easily form winning combinations more easily. The key is to get 9 or more consecutive wins so you get the big 4×4 Gem Rock which can lead to big wins. If you get a 4×4 Gem Rock consisting of the high value star stone/gem, this can lead to huge wins. Variance wise, it’s medium to high with maximum wins of 2,500 times your stake on each spin.

If you like Gem Rocks, I recommend you try some of Yggdrasil Gaming’s other superb slots with Valley of the Gods and Vikings Go Berzerk 2 of their better offerings.