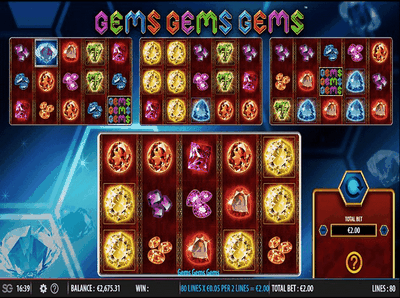 The bigger the rock, the bigger the price tag! While a large shiny gemstone may have been out of your reach before, now is your opportunity to gather the most sought-after gems for extraordinary wins!
Gems have long been a popular theme for slots developers with many already in existence such as Crown Gems from Barcrest and Novomatic’s Just Jewels Deluxe slot but Gems Gems Gems casino slots has already proved to be a popular hit at land based casinos thanks to how fast the gameplay is – in addition to its sparkling appearance, magical sounds, and the big wins that are on offer in the free spins feature!

Gems Gems Gems is powered by the sensational Super Multi-Pay game engine from WMS which was also used for the Bruce Lee Dragon’s Tale slot machine and the Valiant Knight slot machine. This means that you’ll be presented with one large reel set and three smaller reel sets situated to the right, with all of them having 5 reels in a 5×3 grid. Boasting a very generous return to player percentage of 95.

The Reels Are Sparkling

Let’s face it, we all crave the finer things in life, and you’ll definitely be craving the luxurious gemstones that feature as symbols in the Gems Gems Gems slot games with twelve different symbols featuring in total.

Two of the twelve are special symbols – a Wild and a Feature (just the WMS term for Scatter). The Wild is the glittering Gems Gems Gems logo which can substitute for the Feature in order to create the highest possible combination on a payline while the Feature symbol is a very large diamond – don’t let your wife see or she’ll be wanting an upgrade on hers!

Both the Wild and Feature symbols that land on the main reel set are replicated to their exact same positions on the other three smaller reels in order to provide you with further winning opportunities, with a swooshing sound playing out as they are copied over each time.

The other standard symbols include Emeralds, Sapphires and Rubies which come in different shapes and sizes – with zero playing card symbols used which is always welcome!

Like so many online slots developed by WMS, a free spins mode is the sole feature in the Gems Gems Gems online slot. That may disappoint many of you who enjoy slots packed with bonus features, but it’s actually a very easy feature to trigger and it never fails to reward you with big payouts that could see you strutting into a jeweller shop for gems of your very own.

When your free spins start playing out you’ll only see the main reel set which is enlarged to cover the screen and you’ll also have the opportunity to trigger even more free spins by landing three or more Feature symbols once more – something which can be done twice for a maximum of 20 extra free spins – practically guaranteeing big shiny wins!

While it boasts fast gameplay there are actually many better classic slots and fruit machines to play online instead of the Gems Gems Gems slot machine which will only appeal for its Super Multi-Pay structure and the free spins mode boasting lots of multiplier bonuses and opportunities for additional free spins.