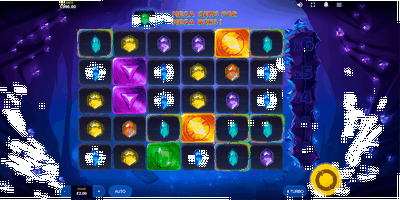 About the Gemtastic Slot

The Gemtastic slot machine played on a 6 reel slot with 30 paylines. Featuring Tumbling Reels, Red Tiger introduces you to a sparkling experience with the Gemtastic slot! As well as this innovative gameplay feature, you may also be treated with Mega Gems that dominate the reels for big winning potential!

How to Play the Gemtastic Slot

Select the Gemtastic slot paytable to view information such as the winning lines, symbol values and bonus rounds within the game.

You can edit the stake in the Gemtastic slot by selecting the ‘+’ and ‘-’ buttons to increase or decrease the total bet amount.

Select the autoplay feature in the Gemtastic mobile slot play a predetermined number of spins at a set bet amount.

During any spin within the Gemtastic slot, a particular Gem may sparkle with a Magic Glow. If these sparkling Gems are involved within any winning combination(s), they will be awarded and then dispersed, transforming into several Wilds when respun via Tumbling Reels.

The retro theme is popular amongst casino game providers, with the creation of the Gem Blast slot and Jack in a Pot.