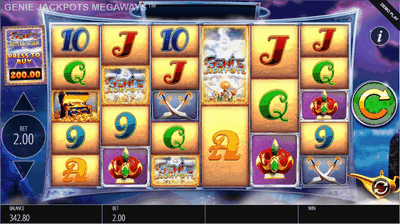 Good news for fans of two earlier creations by Blueprint Gaming: the thrills and abundance of features on Genie Jackpots and TED have been transferred to the reels of the next addition to their MegaWays series. On Genie Jackpots MegaWays, we can look forward to a random Genie Power Spin and a Cave of Wonders free spins round, each with four options that can produce wins of up to 10,000x your stake. Plus, players can now buy the free spins feature at a fixed amount.

At the beginning of 2018, Blueprint Gaming signed a license agreement with Big Time Gaming to use their MegaWays game engine, an absolute marvel of maths ingenuity. With up to six reels and up to 117,459 ways to win, the engine offers unlimited possibilities to design creative gaming concepts that will provide exhilarating slotting sessions. After releasing Diamond Mine and Irish Riches – nearly identical clones of BTG’s Bonanza, Blueprint went all out with Genie Jackpots MegaWays, giving it their own twist and special features.

A dreamy sky scene with fluffy clouds accompanied by a typical Arabic soundtrack provides a sense of magical moments in the background of the intricate game window. A golden lamp stands on the right and will release the genie when the time is right. Extremely sharp graphics and crisp animations round off a masterpiece in slot design.

Pay symbols include the usual 9s to As card suit at the low end, while at the high end is a set of curved Middle Eastern swords – usually known as scimitars, a royal turban with a green gem, and an open treasure chest spilling gold coins. The top symbol is the Jackpot Genie slot logo. The wild symbol is the genie itself, while the scatters are in the form of a beautifully crafted tile with the word Bonus across.

Genie Jackpots MegaWays is a video slot in HTML5 format with six reels as well as variable amounts of reel positions and ways to win. On every spin, each reel will reveal two to five reel positions, allowing for 64 to 15,625 win ways. Bet sizes start at a low-roller-friendly 0. Some casino operators might choose a lower setting for the maximum bet. Overall, the slot has medium-to-high volatility with an RTP of 95. OS platforms.

The Genie Is Released

The first occasion for the genie to escape from the golden lamp is the random Power Spin feature. The genie can emerge on any spin in the base game to grant players one of four wishes, each awarding one modifier for the spin. The game leads to a second screen with three golden lamps, allowing the player one pick.

Three to six scatters anywhere on the reels in one spin will award the Cave of Wonders with between 10 and 20 free spins. Alternatively, the feature can be bought at a fixed multiple of the initial stake. The game will again lead to the second screen, this time displaying four golden lamps. Players have one pick to reveal one of four extra features – Multiplier Wilds, Unlimited Multiplier, Genie Streak and Locking Wilds. The selected extra modifier will then be active for the entire round.

A Genie Streak starts with a winning spin, locking all from the winning combo and starting a respin. Any further symbols landing on the respin will be locked as well, and another respin is awarded. This continues until no further symbols land on the reels. Filling all reel positions with locked symbols will see the genie appear to offer one pick from three lamps – awarding one, two or three extra free spins.

My personal favorite, Locking Wilds, is played with maximum ways on reels two, three, four and five. However, reels one and six are not fixed. Any wild symbols landing on the middle reels on a free spin will turn into sticky wilds until the end of the round. Filling all five positions of a reel with sticky wilds will award one to three extra free spins.

The Magic Trick for the Impatient

Want a quick fix, or are you too impatient to wait to hit the free spins round? Then use the Genie Bonus Wish to the left of the game window to buy a guaranteed feature. The cost is fixed at 100x your initial stake. For example, at a 1-coin bet, it will be 100 coins. The genie appears and adds more bonus symbols to the reels, guaranteeing that a minimum of three will land on the spin. Subsequently, the game first leads to the selector screen for the extra feature – just like in a standard bonus round – before starting the free spins.

The magic genre has been widely used in countless offline and online slots as it has proven popular with slot players. If you’re a fan of magical moments, you should try Magic Mirror from Merkur to see pay symbols expand in free spins. Alternatively, you can rush to the side of Snow White and fight off the evil stepmother in Fairytale Legends: Mirror Mirror from NetEnt.

Ever since the first release featuring the MegaWays engine, avid slot players have been waiting for Blueprint to create a unique game that separates it from the other BTG formats. The genie has been released, and it does not disappoint. The Genie Jackpots Megaways slot at the top of the scale for entertainment, and at times for volatility – although the generous RTP will help to avoid a quick bust. The abundance of features will keep everyone on their toes, as each can produce super mega wins that can amount to thousands of times your stake. What is also commendable is the minimum bet size of just 0.