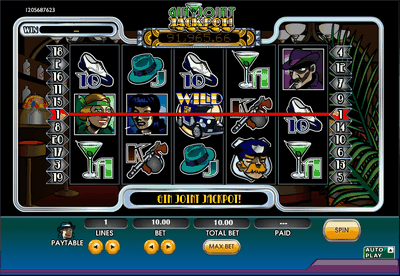 Prepare for the Heist of the Century

There’s a standard display for you to experience in this slot, which provides players with a total of five reels and three rows. Therefore, it’s a familiar enough interface for you to play through. Alongside this, all players get the chance to place wagers on a total of 20 different win lines. However, if these are too many for you, you can customise them easily enough. Simply make use of the ‘Selection Lines’ button to do so. In addition to this, there’s the ‘Stake Down’ and ‘Stake Up’ buttons for you to make use of as well. These allow you to change around the value of the wager that you place per spin. With these, you’re able to select from a range of between . This means that the maximum overall wager stands at a total of 0 per spin.

Graphically speaking, everything in the game does look a little bit 2D and flat. However, the background and icons are very colourful and appealing all the same. The scenario of the game takes you to the set of the gin joint in the 1920s. Then, upon the reels you will find various different symbols. The first five of these icons are all relevant to the theme. Therefore, you’ll get to spin through the pair of shoes, the green bowler hat and then the brass knuckles. A tommy gun is next in line and then comes the gin cocktail icon. This one can multiply your in-play bet by a total of times 100. The final two standard icons are of 1920s flappers. The highest of these can reward you with a maximum pay out of 400 times your in-play bet.

Try for the Jackpot

As well as the reels, rows and icons, you will find that there are some intriguing special features for you to play through. The first of these exists in the form of the wild icon. It is this icon that comes in the form of the mobster’s car. As a wild, this one substitutes for all other icons on the reels. The only exception to the rule is the scatter icon. Five of the wild symbols coming into view on a winning bet line, you will receive a maximum reward of 10,000 times your wager!

There’s a selection of scatter icons in the game as well, starting with the cop. This one can show up across all reels and regardless of where it comes into view, it will provide a reward. These will then multiply your total stake by a random amount. Five of them showing up offer up a multiplier of between times 40 and times 200. Then, you get to help the officer and claim your reward for finding speakeasys on his map. You’ll have a single search for each of the cops appearing on the reels.

You can also find an icon of a detective, which can only show up on reel one. If it does, and an icon of one of the two villains appears next to it, you will trigger one of two rounds. There’s the In Reels Shootout, which pits the detective against between one and four henchmen. This is an automatic gunfight where prizes are awarded for each henchman that is shot. The other bonus round is known as the Shootout Bonus Round. This puts the detective against the big boss in a showdown shoot ’em up game.

Finally, you can see a progressive jackpot on display at the top of the reels. This will increase every time someone places a wager on the game. In order to win this amount, you need to spin three barbells into view during the Showdown Bonus. The higher the stake that you place, the greater your chances of winning the progressive jackpot will be.