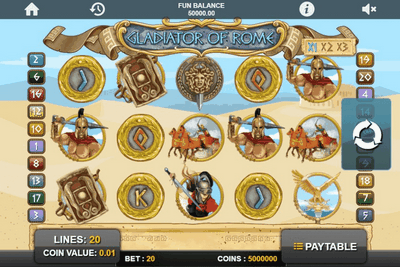 Williams Interactive (WMS) has been making land-based casino games for decades now. Many of their best-selling slots are now available for online casino gaming, to offer players all their favourite slots on their desktop or mobile device. All newer games by the provider are however made for cross-platform play from the start. One such example is the Spartacus Gladiator of Rome.
This gladiator-themed game offers highly volatile action over a colossal reel engine, where two distinct reel sets can line up wins of up to 4,000x your bet. Bonus features such as Stacked Wilds and Free Spins boost your entertainment options significantly.

Spartacus was a legendary Roman gladiator that lived between 111-71 BC. He was famous for leading an uprising of slaves against their abusive masters in that ancient era. WMS pays tribute to this hero by creating an entertaining slot in his honour.

The reels are an impressive sight, as two distinct sets dominate the screen. A Roman architectural backdrop frames the game and helps paint a picture of proceedings. The use of rich colours and detailed images makes the game a pleasure on the eyes. The sound of battle drums, cheering crowds, clanging weapons, and painful screams bring to awareness the fact that you will need to fight for your rewards here.

The game symbols are thematic and aptly bolster the storyline. Enter the Colosseum to find Spartacus, a Female Gladiator, a Gladiator with a Helmet on, a Lion, Battle Headgear, and a Sword. The low paying symbols include card suit icons.

The Game Logo is Wild and will substitute for all symbols on the reels, except the Colosseum Scatter icon. The Wild can also land stacked on the reels to increase the winning potential.

Fight for rewards of up to €1 million in cash or 4,000x your stake over 100 paylines. The heated action of Spartacus Gladiator Of Rome slot place on two distinct reel sets for between €0.

A standard reel set of 5×3 reels sits left of the screen, while a Colossal 5×12 set sits on the right. They run independently but spin at the same time for double the chance of rewards. Land three or more matching symbols line up over one of the paylines from left to right on adjacent reels to produce wins.

The RTP of this game is slightly under the industry average, at 95. Base game spins may seem tedious at times, providing little hope of rewards. We urge you to hang in there for the triggering of the bonus round, as this is where you are likely to strike it lucky.

If you land a Stacked Wild on the standard reel set, it will immediately clone across to the colossal reels to enhance your winning opportunities.

The main bonus in the game is the free spin round. To trigger this feature, you will need to land at least three Colosseum Scatters simultaneously on either of the two reel-sets.

Spartacus Gladiator Of Rome slot review been released in many formats, including Flash, JS, and HTML5. The HTML5 browser software ensures that you can play the game directly from your Android or iOS mobile browser without having to download supporting software. This leaves your phone free of clutter.

The mobile version of the game is played with enhanced high definition graphics. The size of the colossal reels are minuscule on the smaller screen, but the convenience of being able to play while on the go outweighs the smaller game format.

For a chance to play a land-based casino favourite on your mobile or desktop, simply sign-up with a top-rated casino with the help of CasinoWow. The colossal action sequences can reward you well from your time and effort, with a remote possibility of making you an instant millionaire.

High Rolling players will enjoy the game features tremendously. It is highly volatile and offers a high-stake option of €250 per spin to suit deep pockets.