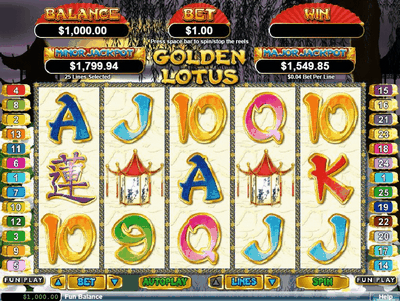 As their recent games had a bit more complex formations, such as ones with 23 fields, 4096 ways to win and adjustable ways to win system, they decided to go back to the 5×3. The “fixed” paylines term means that the players cannot change the number of active lines, and they all have to be played at all times.

This is not a problem, considering that betting lower on all lines is always more productive than gambling high on only a few. A lower limit for the total stake is . The particular recommendation for you is to try the 50 Lions slot machine by Aristocrat gaming.

That is a perfect range that manages to satisfy all types of gamblers, from beginners and low bettors to the majority of high rollers. Fixed paylines are often useful as you do not have to stress after activating a bonus feature on only a few instead of on the full set.

There are two main bonus features in the game:

Chinese Garden Feature: Whenever three or more golden lotus signs land at any position on the reels, the feature is activated (except during the white lotus). A player can select 4 out of 8 lotus cards, which hide the multiplier of up to x100 combined. Besides the multiplier, a player may also be rewarded with 5 to 20 free spins. White Lotus Feature: Three or more scatters required to trigger the feature and get eight gratis rolls. All scatters appearing during the feature are turned into wild icons. Also, a random multiplier of 3, 4 or 5 will be applied to each winning round.

Both features can be re-triggered an unlimited amount of time.

Besides playing Golden Lotus for free and without registering or downloading, you can play it for real money while getting two to three times more than you initially invested into the account.

That is done by claiming various bonuses.

Of course, they are not the only ones, but considering how high their bonus percentage is and how low wagering requirements are, they are considered the best ones right now.

Mansion Casino is an excellent place for beginners to start because of their no deposit bonus sitting at . It might sound like not much, but getting anything for free and the opportunity of earning/spending much more than that without even signing up is outstanding.

If you are an experienced player gambling high, then definitely chase some of the high-roller bonus offers as they can go as high as 100% up to ,000. Offers that good might occur rarely, but they should be used to the maximum when they do.

Besides playing the online Golden Lotus slot on a desktop, using a flash player, you can enjoy hours of entertainment on your mobile device as well! The game runs smoothly across hundreds of different devices, and it did not have any issues up to this date, even though the graphics look outstanding.

As performance is much more important to a lot of players than looks, RTG’s development team did an excellent job at optimizing the game even for devices that are 5+ years old, allowing them to lower the graphics quality to increase the performance.

There are only eight regular signs in the game, represented by five face cards (10, J, Q, K, A), a green flower, two golden fishes and a temple, in a separate order starting with the least valuable one and ending with a temple which is the highest paying one.

A wild symbol is represented as the game’s logo, and it substitutes for all other symbols to help them create winning combinations except for the scatter.

The White Lotus icon is a scatter, and it can appear at any position on the reels with a chance of multiplying the total bet by x500!