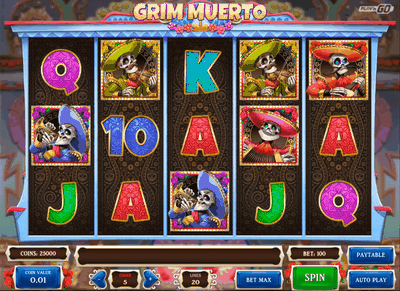 Grim Muerto slot games by Play N Go is an entertaining slot machine, immediately standing out thanks to its a quirky theme. Roughly translated, the title is ‘grim dead’ in Spanish.
While your first impression might be that this game is a bit morbid, you may be pleasantly surprised to find out this game offers a theme unlike any other currently on the market.

Dust off your sombrero, and join this Latin style fiesta where mariachi bands provide the entertainment, and skeletons in brightly colored outfits bring the riches.

Play N Go seems to have decided more is less with this particular online slots game. Rather than flashy visuals and sound, they have gone a bit more simplistic with this game. That’s not to say the game isn’t packed with small, yet effective animations, audio effects, and an impressive looking backdrop.

Some might find the fiesta theme to be a bit odd, but look past the cute and cartoonlike icons, and you’ll find a ton of skulls bouncing around that add to the atmosphere.

Apart from the skeleton mariachi band members, a book with a skull cover represents the Scatter symbol. The spins re-trigger is represented by another skull, this one decorated with bright and colourful candles. The main game Wild symbols comes in the form of an acoustic guitar wrapped by roses.

Pay special attention to the randomly highlighted reel, as this is the wild feature. If a wild icon lands on this reel, watch it expand and cover the entire reel, unleashing potential big wins. This can occur on up to five reels at once during the free rounds within the game.

Looking at the base game, traditional 10-Ace playing card symbols fill out the low paying icons, whilst the band members carry the biggest payouts, up to 700 coins. For most games, this would be enough entertainment, but in the case of the Grim Muerto online there is certainly more action to indulge in.

March Along with the Mariachi Band

Don’t fear the book of skulls, as it brings with it free spins, 10 to be exact. Furthermore, a second scatter is also a part of the action, the candle skull that can only be found within the free spins bonus round. This acts as a retrigger.

There is also the second chance feature. When only two scatters appear, the four mariachi band members will appear as big symbols. Simply choose one of them, and uncover your fate. Two of the mariachis will grant credits, one is a dud, and the last will unlock the full bonus.

However, the gameplay isn’t anything particularly special, and there are plenty of other popular games that mirror it.

This 5-reel game is entertaining throughout – a lot of fun to play. It comes with enough features and bonuses to keep players engaged throughout, and players really can’t ask for all that much more. This online casino game might not be as flashy as some other recent Play N Go offerings, but it is still well worth checking out.