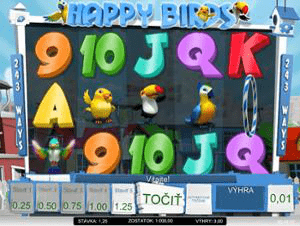 The Happy Birds slot machine the 243-ways-to-win formula that is familiar to anyone who has played some of the more legitimately licensed slot games on the UK online casino scene such as Game of Thrones. Wins are awarded left to right and three symbols make a win. Of all the birds featured in this game, the happiest ones reward players with higher multipliers. The parrot is the happiest of them all, it seems. A magic hoop feature triggers a bonus round. Land two magic hoops in the second and fourth reels and you will be rewarded with a random number of free spins. During this round, more free spins and wild symbols will be awarded at random. There’s also a balloon-based bonus round where you have to fire a (happy, not angry) bird from a slingshot in order to burst hot air balloons, revealing coins and multipliers. The way coin values and line bets work has been hugely simplified in the Happy Birds casino slots. Rather than mess around with sliders, players can choose from five fixed bets to determine how much they would like to risk per spin. An auto spin feature keeps things moving nicely.