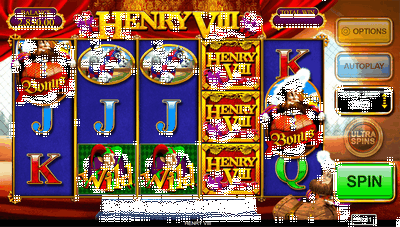 Henry Henry Viii online by Inspired Games showcases one of England’s intriguing monarchs, mainly in relation to his 6-marriage record during his reign. Although some of those marriages went down in history as controversial affairs, this cartoon-based, 20-payline slot comes with a less serious thought on those matters. Here, Henry Viii is depicted as a jolly and benevolent king who awards players with random Reel Modifiers and powered-up Free-Spins.

Occasionally and during paid spins, the King opens a Treasure Chest to bring out any one of four (4) Reel Modifiers. When 3 or more of King Henry’s cartoon images land simultaneously as spin-outcomes, the event initiates the activation of the Free-Spins Bonus Game. To make the king’s court even merrier, the Jester is in attendance as Wild Symbol in both regular and bonus games.

The Henry Viii casino slots is the highest paying symbol. It awards 4, 50, 200, or 500 credits, whenever 2, 3, 4, or 5, land as coordinated symbols within a payline. This particular icon is configured as a 3-layer stack of Logos that may appear partly, or fully stacked in one or more reels.

The Court Jester is also a high-paying symbol when occurring as matched symbols in a paying line. It awards the same range of credits awarded by the Game Logo on the longest of a grouping of 2 or more that occurs as winning combination.

At the same time the Jester Wild can also represent a regular symbol.
or even expand a grouping into a longer winning combination.

In one of three (3) Free-Spins Bonus Rounds awarded by the Bonus Game Spin-Wheel , the Joker Wild is featured as main win-boosting element.

Pay attention to the Henry VIII animation below the screen. During an ongoing regular spin, the cartoon figure occasionally opens a Treasure Chest to award a Reel Modifier.

A Colossal 3×3 Symbol that may land anywhere to furnish a block of 3 identical icons in 3 adjacent reels.

Multiple Bonus Symbol Additions that turn all columns into Super Bonus Reels. As such, players have greater chances of activating the Bonus Game Spin-Wheel.

Multiple Henry VIII Logo Additions to make certain that the related spin will result to a Big Win.

The King Spins – A Bonus Round comprising 2 types of Free-Spins Choices. One awards an indefinite number of bonus spins powered-up by a Progressive Multiplier. The other activates eight (8) Free-Spins with a fixed 4x Win-Multiplier.

Wild Joker Spins is a set of three (3) free games. Here, every bonus spin puts in place a stack of Joker Wilds in a randomly selected column.

The Royal Roller is the most generous, as this Bonus Mode will result to multiple payline wins with certainty. Although awarding only a single spin, it will be played on a slot grid containing only one kind image in all 15 positions.

Henry VIII online slot runs on a feature-rich grid, as four (4) Reel Modifiers may adjust the reels to either increase chances of hitting or of landing surefire payline wins. Players can expect to reap greater bonuses via the Bonus Game Spin-Wheel.
or even a single spin on a grid filled entirely with only one kind of symbol.