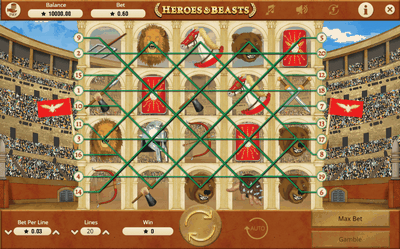 All for Gold and Glory

This slot takes place in a time where feared warriors were forced to fight against one another, as the crowd cheered on the violence that took place. The whole UI of this game is situated under the glaring sun, with a packed stadium all around just waiting for the fighting to begin. To be honest, it’s definitely an original and very exciting atmosphere to come out of a slot game, as you’ll notice the war-like vibe right away as soon as you get started playing.

The downside of the game comes about through the production values, as they are somewhat ordinary. But, that being said, what’s used is still enough to draw you right into the Heroes & Beasts universe, as this is a game that stands by its theme through and through.

The Spoils of War

Booming Games definitely took care to make sure the game would be classic and efficient as far as the gameplay went. They wanted to make sure that any slot player, regardless of experience, could enjoy the title. Heroes & Beasts features 5 reels and 20 paylines, which means that this low to medium variance release falls right in-line with other Booming Games releases.

In order to make use of this game to full effect, you have to get a specific combo of symbols on your active payline. Of course, your winnings will increase along with your bet, as well as the value of the symbol combos. You can always choose the “Bet Max” option to go all in (at a rate of 20.

With a Lion’s Roar

As all good real money slots do, Heroes & Beasts definitely has its fair share of special features to keep things interesting. There are random symbols that can expand and cover all of the reels, and if it is triggered correctly it can create a big win. There’s also the wild symbol, which can replace any other symbol on the board for extra wins. Finally, there is a roaring lion, which acts as the scatter and can give you free spins if you land at least three of them anywhere on screen.

Looking Towards a ‘Legend’

On the theme front, Heroes & Beasts certainly has some unique touches, but in gameplay it really is no different to any other Booming Games title. That being said, this means that players who enjoy this particular game will find that there is plenty else out there to play that is along similar lines.

If we had to dip into the Booming Games back catalogue and make a recommendation. Two titles in particular jump out to us in Jungle Jumpers and Legend of Qu Yuan. The former throws players into the heart of the jungle, while the latter embraces Chinese legend. Both of these games are Heroes & Beasts clones on the gameplay front, so are sure to deliver the real money slots fix that you’re looking for.

Experience the Thrill of Battle with Heroes & Beasts!

Booming Games did a great job of marrying the classic slot game with a totally original theme and exciting gaming universe here. Don’t forget to raise the stakes to put your name in for the big wins that this game has to offer, as Heroes & Beasts is a game that is simply big in size and big in stature!