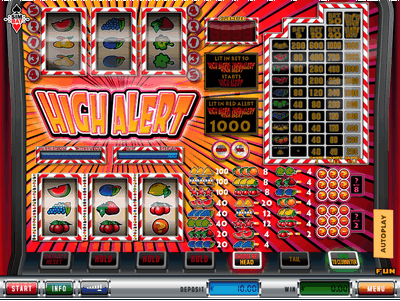 As both a confirmed Trekky and a slot gaming fan, all five of WMS’s Star Trek based slots have proven right up my street, it’s always the first one though, much like the original series, which I reserve the most affection for. Some branded titles might seem a bit optimistic for a slot game manufacturer to tackle, Star Trek is one of the biggest of all and many worried WMS would make a hash of it. All the fretting came to naught however, as this is an excellent game with a big following on the casino floor, with its release to online casinos and a full mobile optimisation, it’s popular at many other venues now in the virtual arena also.
There is nothing overly spectacular about the layout of the Star Trek Red Alert slot game, in the end it’s a fairly simple 5×3 slot with just 25 fixed pay-lines. Where it sells to players is on the basis of it’s theme, like other branded games such as WMS’s Wizard of Oz slots or the Super Monopoly Money game for example. Where this slot excels, and many other official or tribute slots fall, is on the basis of its gameplay, which is feature packed and entertaining.

Gone are all the royal playing card symbol for this slot, all the winning icons from which you can form combinations are unique and individually produced. There are some nice use of series tie-ins also with oddities such as the rock creature multiplier feature being added to bonus features associated with the iconic cast of the TV show and of course one of the world’s best known movie props – the star-ship Enterprise herself.

Arguably the best feature of those on offer is the Red Alert free spins round which gives the game its title, here you take command of the Enterprise and get a whole new reel set to play with, blasting your way through each spin until your shields are depleted, though they can be refreshed throughout the round in a novel approach to retriggering free spins. Each spin blasts away a multiplier and with up to x15 on offer, there is a big win hidden away in this round for the intrepid slot gaming explorer.

As with almost all branded slots, whilst you can hit big wins, the huge costs of producing these games do lower the RTP and variance a touch, though 96% and a medium volatility is still not to be sniffed at. Overall it’s a much more rewarding slot than IGT’s version of the Star Trek slot and arguably nicer to look at and play. I could be a little biased on this given IGT’s version of the game is based on the 2009 Star Trek movie rather than the original franchise, both have their plus and minus’s but I do have a lasting affection for this game and the show it is based on.