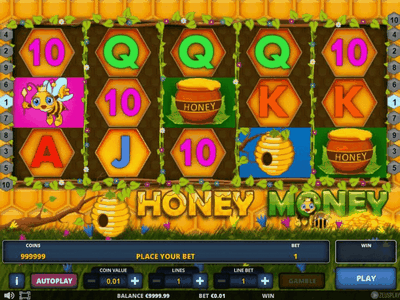 Honey Rush is a fun-filled slot game that is sure to appeal to all nature-loving users. A visit to the beehive could see the lucky player rewarded with a sweet pot of 9000x their bet. The game also offers beautiful cascading reels and enough Sticky Wilds to ensure that players are kept busy as bees!
Keep reading our review of this fun slot game by Play’n GO and learn anything you need to know before start playing.

Branches of trees line the game screen, surrounded by leaves and flowers. Leaves gently fall from the trees in the background. The musical soundtrack wonderfully reinforces the cheerful outdoor setting of this slot, with the sounds from an acoustic guitar intermingled with the cheerful chirping of birds.

The crown jewel of this scene is undoubtedly the hexagonal reel, the “beehive” where all of the action takes place. The reel slot symbols are fresh and vivid in colour. The large diamond slot symbol is the game’s highest paying icon, followed by the gold bee token, the silver hive token and the bronze honey token.

Four bright flowers constitute the game’s low-paying symbols. Honey Rush does not make use of any scatter symbols, but it does contain a honey pot Sticky Wild symbol, which substitutes for all symbols.

Honey Rush is a high volatility slot with an average RTP of 96. This means that players may experience some dry spells before dipping their hands into the honey jar.
winning combinations are earned by forming clusters of 5 or more adjacent symbols.

Winning clusters are then cleared from the reel to make way for new slot symbols to fall. These clusters pay out according to a set paytable. The betting range is typical, with players allowed to bet between €0.

As with many other casino slot games, Honey Rush offers an Autoplay function, allowing players the option to select up to 100 automatic spins.

Honey Rush provides users with a number of bonus features. The first such feature is the colony feature. During any non-winning spins, a colony feature may be triggered. When this occurs, slot symbols surrounding the middle symbol on the grid transform to match it, thereby guaranteeing a win for the user.

The worker colony, providing a cluster size of between 7 and 15

The queen colony, which provides a cluster size of anywhere between 20 and 37.

Once the consecutive cluster wins stop, the rush meter returns to zero.

A third feature is the presence of multipliers. As players climb up the rush meter levels, they are awarded honeypot Sticky Wild. These Sticky Wilds are randomly assigned multipliers of either x1, x2 or x3. More Sticky Wilds with high multipliers means that a player’s winnings can be greatly enhanced. What a sweet deal!

Thanks to Play’n GO, users will be pleased to know that Honey Rush is available on multiple platforms, including desktop, laptop, tablet and mobile devices. This makes it super easy for players to access the game wherever they are.

Honey Rush is a wonderful online slot that will cater to a wide variety of players. The delightful graphic presentation, laid back soundtrack, and uncomplicated gameplay will ensure tons of fun for both novice and veteran players. With a bit of luck, players could walk away with a pot of wins.