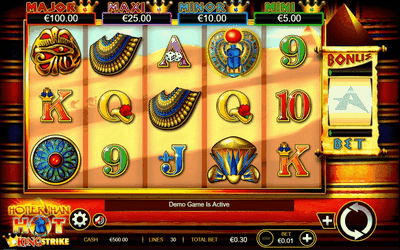 Visually, Hotter Than Hot slot is pretty standard Ainsworth fare – set against a desert backdrop, the reels include lower value A to 9 playing cards alongside a selection of Egyptian-themed objects. Look out for a flower, the eye of Horus icon, a medallion-style treasure and a traditional necklace. The most rewarding of the standard symbols is the bird.
Appearing on reels 3, 4 and 5 only, the sunlit pyramids symbol is the wild. It doesn’t offer any payout but it does replace all other symbols apart from the scatter. It can land fully stacked on reel 5 in the base game too.

Hotter Than Hot’s main feature is the Free Games feature – to trigger it, you’ll need to land 3 or more of the scarab beetle scatter anywhere on the reels on the same spin. You’ll also be awarded 10 free spins.

On each free spin, the 5th reel will be filled with a stacked wild. If a wild lands anywhere on reels 2 or 4 during the feature, those wilds will expand to fill the whole of the reel or reels.

You’ll notice a 6th reel perched to the right of the main set – this is key to triggering 1 of the 4 fixed jackpot prizes on offer. Land a 5 of a kind combination plus a crown in reel 6 and you’ll win. Whether you bag the Mini, Minor, Maxi or Major depends on which symbol formed the 5-of-a-kind combination and whether that combination included a wild. Awards of up to 333 times your stake are on offer here. You can trigger bonus prizes during the free spins round as well as the base game.

Hotter Than Hot casino slots is a fairly simple game – the design is solid rather than spectacular and sits in the middle of the pack as far as visuals go. Not bad but no real wow factor. The base game action isn’t the paciest. The game hits its stride during the feature though – it’s not the easiest to trigger but the expanding and stacked wilds can have a big impact.

Ainsworth’s take on the classic Egyptian slot is a typically sturdy effort. Get lucky with those free spin wilds and this trip to the desert can indeed be Hotter Than Hot. If you like the theme, Lady of Egypt by WMS is a superb choice.