Invaders From The Planet Moolah 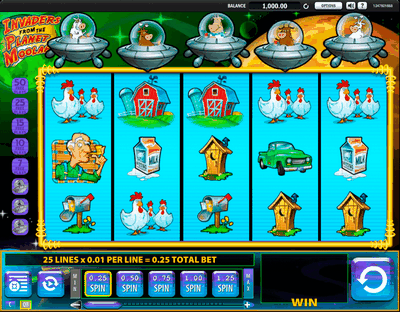 Invaders from the Planet Moolah Review

If your love for all things Roswell-related translates into the entertainment that you seek, Invaders from the Planet Moolah is the slot machine game for you.

Packed full of fun graphics, interesting space sounds, and plenty of opportunities to bonus, it offers excitement with every spin of the reel.

Close encounters of the third kind await you with this game by WMS. There’s nothing quite like watching dairy cows being abducted by alien cow pilots! An intergalactic good time awaits you with the Invaders from the Planet Moolah bonus round.

Take a chance on spinning its reels and you may have an out-of-body experience when you win big.

Take Me to Your Leader

You’ve probably seen enough alien abduction movies to know how it works. Aliens love livestock and the slot game Invaders from the Planet Moolah is no different. It features cow pilots in each of its five flying saucers.

The symbols on the reels are all farm-related and include Grandpa, Grandma, Man, Cowgirl, Dogs, Chicken, Truck, Trailer, Mailbox, Outhouse, Barn, and Milk.

Resembling any small farm in the Midwest, the game tells the tale of what it’s like to live in a secluded part of the country prone to alien invasions.

As the spaceships abduct livestock, you can’t help but chuckle at the surprising moo that is let out with each cow that is taken from its home.

The MIN bet is . There are 5 reels and 25 paylines in Invaders from the Planet Moolah. The maximum payout is 3750 coins a spin, while the RTP is 92.

When wild symbols appear on reels 2-5, it makes all symbols wild.

The AutoSpin option is available and active until you click to deactivate it. That means that as long as there are credits on the machine, the reels will continue to spin until you stop them.

Each could lead to a bonus Feature which helps you earn additional cash with every free spin awarded.

The Cascading Reels Feature can be found in many slot machine games. When a combination of winning symbols is present on the reels, they disappear and are replaced with other symbols that combine together to create new winning combinations.

The five UFOs zap away the symbols revealing the new symbols. You need eight consecutive wins to launch the bonus feature which could help you rack up large sums of cash.

You also have the opportunity to be taken to the Invasion Feature where 7 free spins could help you bonus, too.

Get four wild cards in a row during the Cascading Reels Feature and you’ll be taken to the Invasion Feature where 7 free spins are rewarded.

If eight wins in a row is achieved, you’ll activate the free spin bonus feature where 50 free spins are yours for the taking.

Being able to bonus several times while the reels are spinning is one of the things that makes this basic slot machine game extraordinary.

If you play your wild cards right, you could have back-to-back free spins which steadily increase the amount of money that you win.

Invaders from the Planet Moolah slot machine offers non-stop fun and excitement. From its illustrative graphics to its hilarious intergalactic sound effects, this game has a lot of entertainment value.

It offers a decent paytable, plenty of opportunities to bonus, and low minimum bets making it a game you can play for a while without suffering big losses.

With its multi-feature rounds and recurring bonuses, it’s easy to see why players return to this game for additional doses of hilarity and entertainment.