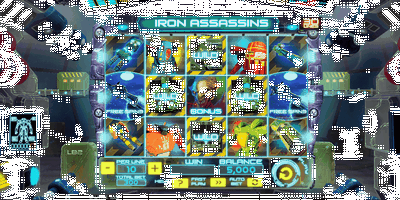 Space is also called as the last frontier and something that is still unexplored and waiting to be discovered. Movies like Star Trek, Star Wars have definitely romanticised the idea of space travel into faraway galaxies and new planets. Even if humans haven’t been able to venture into faraway galaxies in real life doesn’t mean that we can’t do the same in reel life. Iron Iron Assassins slots by Spinomenal has definitely ventured into this direction. While it may not have been the first developer to do so, the provider has seemingly refined the overall experience of a space odyssey with their new slot.

The player automatically dons the role of a commander of the ship heading into an unknown destination. The background seems to be a cool futuristic place surrounded by spaceships and guns. As commander of your ship, you will face the unknown with your team and return back to your home planet in one piece. The soundtrack sets the tempo of the game too. The graphics and smooth gameplay indeed compel one to give it a shot. The symbols in the title include ray guns, evil villain, robots, spaceships etc.

Ready for Some Space Adventures?

Iron Assassins casino slot online is a 5 reels and 30 paylines title made by game manufacturer Spinomenal. Before you embark on an adventure, you will first need to set the bets on the bet lines. The minimum bet here is €0. Once you have placed your bets, you can then hit the spin button to set the reels in motion. There is also a Fast Play and Auto Bet feature within the slot which allows players to spin the reels automatically rather than manually for a specific number of times. The RTP of the slot stands at 97. The jackpots amount that a player can win here is 150,000 coins.

Scatters. The scatter is represented by the battle spaceship in the production.

The wild is shown by the wild icon within the title and can substitute for all the other symbols except for scatters. There is also a wild multiplier within the title which allows you to boost the prize combo you have managed to create with the wild symbol. The multipliers here are 2X, 3X, 5X and 10X. A wild generator is also present within the confines of the game which can turn random icons into wild.

Alien bonus round. Getting three or more of the alien icon allows you to play the bonus You will then come across a moving target zone which is also a place that will double up as a multiplier for your stakes. All you have to do here is hit as many moving targets as you can for a big bounty. This means that you will need to be extra vigilant and careful while playing the slot.

You can play Iron Assassins slot games money as well as for free on your smartphones as well as desktops. The casino title has multiple wilds feature within the title which can be made use of effectively. Rather than going for free spins which are considered to be the prize earner of a slot, you can make sure to hit as many wilds as possible. The presence of extra wilds makes this a fun-filled slot to play. The money multipliers are decent enough for big wins. Don’t also forget the bonus round here as it can be equally rewarding.

Gamblers can play Iron Assassins slot machine online on different casinos online. It boasts of incredible gameplay and graphics for a 3D slot. The presence of extra goodies like the moving target multiplier and random wild generator makes for an interesting play. This medium variance slot is suited for both experts as well as novices trying out slots for the first time.