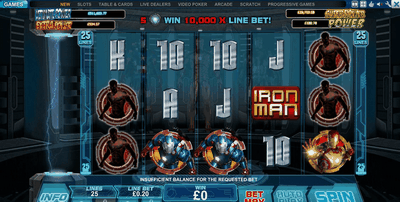 Ready for an action-packed and feature-rich slot machine? Jump into the Iron Man body suit for an adventure through the eyes of Tony Stark in a blockbuster slot developed by Playtech (and therefore available at sites like Grosvenor Casino) based on the hit movie that was released in 2013.
The movie saw Robert Downey Jr take up the leading role with Tony recovering from PTSD (posttraumatic stress disorder) after the events that occurred in fellow Marvel movie, The Avengers, and of course there was also a showdown against arch-nemesis Mandarin who led a terrorist organisation. The success of the movie was highlighted by the fact that it became only the sixteenth movie to gross over billion.

Of course like the movie, the Iron Man 3 online is a sequel from Playtech which follows on from the success of the original Iron Man slot machine and the Iron Man 2 slot machine which were both very popular amongst players, as is this!

Playtech have done a great designing the symbols in Iron Man 3, with a slick shiny metallic appearance prevalent, and there are thirteen in total.

The most sought after symbol is the Iron man chest logo which is the Wild and of highest value, with five on a payline paying 10,000 coins – plus it substitutes for all others aside from the Scatter symbol. The Scatter is the Iron Man text logo, while there are three Iron Man body suits along with Mandarin himself.

Completing the line-up is simplistic Ace to 9 playing card symbols, which as I’m sure you are used to by now, have the lowest value of all.

Land the Blue, Gold and Black Iron Man suits on reels one, three and five during the same spin and you’ll be rewarded with a respin. The benefit of this is that the three suits hold in place until the spin is complete which dramatically boosts your chances of landing a big win.

Aside from being lucky enough to scoop the Marvel jackpot, the Hall of Armor feature is without doubt the main reason the play the Iron Man 3 bonus.

Iron Patriot: Grab 15 free spins (which is the highest amount available) with the additional benefit of a dynamic multiplier, plus the blue suit landing on the central reel adds three spins to your counter.

Mark 42: This game mode sees you begin with 10 free spins however they come with the added benefit of frozen Wilds. To freeze the symbols in place Mark uses his superhero powers to zap the symbol and it then remains in place for three spins – and this really adds up when you land several on the same spin. In addition to this landing the gold suit on the central reel sees three more spins added to your spin counter.

War Machine: The final game mode sees you start with just 8 free spins which is the lowest amount of all, however there are random Wilds which fall onto positions to boost your chances of hitting a win. For three more free spins in this mode it is the black suit you need to land on the middle reel.

After experiencing each of the three free game modes, I found the Mark 42 one to be the most rewarding thanks to the vast winning opportunities the freezing Wilds bring. On top of this the free spins feature can also be retriggered as you play – again simply requiring three or more Scatter symbols to fall on the reels to boost your spin counter!

Saying that, the metallic-robotic design is superb and has really captured the theme of the movie, plus there are two bonus features to watch out for. While the All Systems Go Respin occurs quite regularly – much to my surprise, the standout feature is the Hall of Armour free spins mode as it enables three different game modes along with the fact that the feature can continue to be retriggered. Of the three the Mark 42 is my favourite as that’s where I enjoyed my largest wins.