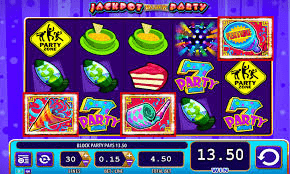 Everyone loves a good party to let their hair down, pop a party hat on, open presents, to take to the dancefloor and dance the night away under a disco ball, but while many people only get to experience this once a year on their birthday, the Jackpot Block Party online slot from WMS enables you to party all year round!
Despite the title there is no progressive jackpot offered, but instead there is a base game jackpot of 333x your stake available in addition to a Present Pick feature and the Block Party bonus feature that sees you go from one party to another unwrapping presents for huge wins!

You’ll be dancing your way across 5 reels and 30 adjustable paylines in this fun-filled party with bet per line options ranging from 1p up to £2 so you can spin the reels from 30p up to £60 each and every time – plus it boasts an inviting 96. RTP!

The excitement of a party continues on the reels with a total of twelve symbols that boast bright and bold colours (there is no need to adjust your monitor, WMS designed them in this quirky style), but most importantly offer some very large payouts!

It’s the Jackpot Block Party mobile slot logo, which seemingly includes every colour from the rainbow, that offers the highest payout of all with five on a payline resulting in a massive payout of 333x your stake. In addition to this it is actually the Wild symbol and can substitute for all other symbols aside from the Feature symbols. While you may think that is a misprint as most online slots offer contain one Feature symbol, I say ‘symbols’ because there are three different Feature symbol designs in the Jackpot Block Party slot machine. These are represented by party accessories with a party popper appearing on the first reel, a paper trumpet on reel three, and one of those whistles that rolls out as you blow on it on the fifth reel.

There is also a neatly wrapped present, a 7 with party written across it, record decks, a glitter ball, lava lamp, party zone sign, party food and a delicious slice of cake.

While the drinking and dancing is all good fun, unwrapping presents to unveil what you have been given is what most of us really look forward to when it’s party time. While you may find yourself disappointed at some of the party presents you receive (like those dreaded socks from your aunt), you are guaranteed to love the presents in this Present Pick feature which is a simple pick ‘em bonus game that triggers quite regularly – no need to wait for your birthday, it’s party time all year round with the Jackpot Block Party slot machine!

Once you land three or more of the present symbols on the reels you’ll then get to pick one of the presents to reveal what you have been given. After making your selection the gifts in the other presents are then revealed to show what you could have won with prizes of up to 100x your stake on offer. In addition to the cash prizes, you could also trigger the Block Party feature which offers even bigger wins!

Groove Through the Party Zones

Got so many friends and family throwing you a party that you simply didn’t want to let any of them down? That’s your scenario in the Block Party bonus feature as you hop from one party top another collecting presents from your loved ones.

The parties kick off once you land the Feature symbols on the first, third and fifth reels before you are then presented with a screen showing all four of the party zone which are named Players, Office, Costume and VIP), however only the Players party will be available to you when you begin the feature. You then get to tear the wrapping paper off your presents to reveal your cash prizes – however there are other symbols to watch out for too.

Should you open a present which contains a Buzz Kill or Pooper you’ll find yourself enduring an early and lonely night as you are transported back to the base game, however landing a Plunger or Super Plunger symbol enables you to open presents in the other party zones too – and if you can manage to navigate your way around all the parties you’ll be enjoying huge wins that need celebrated!

With two exciting pick ‘em features you’d be a fool to be a party pooper so get spinning the reels now!