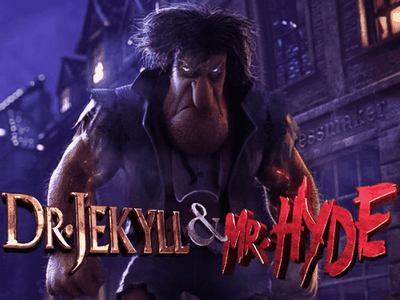 Bookmark It For Later

Version Directly in Your Browser

Based on the classic novel by Robert Louis Stevenson, this entrancing 3D slot machine tells the story of the sad Dr. Jekyll and his monstrous alter-ego with that famous Betsoft panache. Featuring 5 reels, 30 active paylines and real money prizes that can amount to 480,000 credits, Dr. Jekyll & Mr. Hyde offers you more than enough profit-making opportunities, whether you want to use a laptop or a phone to enjoy it.

What makes this slot a thrill to play is not only its fun presentation but also its list of bonus features. The game comes pre-equipped with a long set of extras that are perfectly built into the story and offer a variety of prizes, from double-up games to free spins rounds, cash bonus levels, wild symbol giveaways and more.

Even though it may seem a bit complex, the Dr. Jekyll & Mr. Hyde online slot by BetSoft is anything but. Before you begin your session, you’ll only need to adjust your stake with the left-side controls. These betting controls allow you to adjust your coin value, paylines, and the number of coins you bet per each payline and they’ll let you choose a bet ranging from as little as 0.

The slot’s paylines are visible at all times, so if you want to see which line is worth activating, you just have to hover over the small numbers at the sides of the reels. The game has a total of nine picture symbols you can collect on these lines to win a prize, each offering payouts in coins. Play with real cash with one coin per payline and the prizes will range from 5 to 1,200 coins, but play with five coins and the payouts will jump up to a whopping 6,000 coins per sequence. And what’s really great is that you’ll have a shot at doubling any payout you collect via the slot’s “Double Up” feature – something you don’t get with many other slot machines online outside of BetSoft’s catalog.

If you are more of a mobile player, there’s also a compact version of the slot that you can enjoy on any tablet or smartphone, no matter if it’s an iOS device or an Android one. The mobile-optimized version of the slot machine features only a spin control on the screen while all of its other controls can be found only inside the game’s menu.

The game’s active paylines are your ticket to winning any prize while playing. Collect three, four, or five of the same symbols in a sequence on any payline that you’ve activated, beginning with the first reel on the left, and the slot will pay a prize associated with that sequence. The only symbols that are an exception to this rule and aren’t tied to any paylines are the bonus symbols.

There are five different bonus symbols in the slot and they interact in various ways to trigger the extras. Collect a Dr. Jekyll symbol on reel three with red potion symbols on reels two and four and the slot will turn any Jekyll, Hyde, or logo symbol into a wild but also rearrange the remaining symbols on the screen. Collect Mr. Hyde on reel three with blue potions on reels two and four, on the other hand, and you’ll win a bonus prize of up to 20x your total bet. And if the Mr. Hyde or the Dr. Jekyll symbols appear in combination with the game’s logo symbol, you’ll get access to one of two cinematic bonus features, one which can end up paying you up to 160x your bet when playing for real money.

The last feature you can win is the free spins round, which is activated by collecting ten red potion symbols on the same bet size throughout your session. Once the free spins are activated, they will continue until you collect a total of five blue potions throughout the round.

In summary, Dr. Jekyll & Mr. Hyde is one of the most interesting slot machines in BetSoft’s collection that will be a match for any player who doesn’t mind taking a risk. With a medium/high-variance gameplay and a roster of great bonus features, this engaging 3D slot can turn out to be quite lucrative for you. There are payouts of up to 480,000 credits per spin to be earned here when playing for real cash and the lower hit rate certainly hints they are possible. So, if you like volatile slots with immersive stories and you can spare the nerve and money to pursue those big prizes. Dr. Jekyll & Mr. Hyde could be worth your effort.

However, if you like to play it safe, BetSoft’s also has a variety of other slots that offer more balanced payouts. For another classic story, you have the Pinocchio slot which features multiple modes of playing, medium-volatility gameplay, and prizes up to 75,000 coins. There���s also BetSoft’s A Christmas Carol which offers you 25 paylines full of thematic symbols, engaging bonus features and payouts of up to 513,000 coins per spin. Try any of the slots and more of BetSoft’s popular games when you check out some of our reviewed top casino sites and get to collect a proper welcome bonus once you sign up.