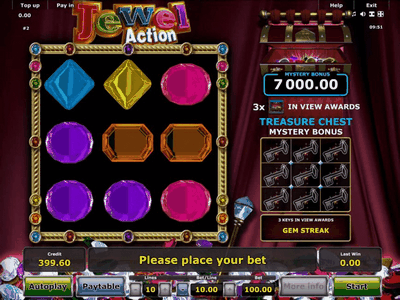 Charming, Glittering Jewels!
The overall layout of this game comes in a three reel and three row format. Therefore, it has much more of a classic slot design. However, it also contains a total of 10 separate bet lines for you to place wagers on. These are not a feature of the game that you are able to adjust in any way. However, you do have the option of altering around the value of the wager that you place per spin. This is done with the ‘Bet/Line’ section and its plus and minus buttons. There, you can move the amount between the minimum of . Therefore, if you have this at its maximum level, the highest possible wager stands at 0 per spin. There’s also an ‘Autoplay’ function in the game. This allows you to spin the reels of the game several consecutive times at the same wager level.

Following on from this layout and betting options, you can see visuals of some decent graphics. The background of the game is present in a plain purple colour. And when it comes to the icons on the reels, these are all visible in several different colours, shapes and styles. To start off with, there’s a brown jewel, and this is joined by a purple circular jewel. Then comes the red ruby heart and the blue, sapphire diamond shape. There’s also an emerald green jewel and a yellow diamond-shape. It is the latter of these which will allow you to receive maximum winnings of 100 times your wager. Then there’s a pink orb jewel and finally, an actual transparent diamond. And further to this, two character icons are also present in the form of a king and his queen, both with crowns on.

While this game does have a classic slot kind of layout, there are more special features in it than what you would find in such normally. For example, if you cover the entirety of the icon positions in symbols of the king, you’ll receive a huge pay out of up to 50,000 coins! However, this is just one of its great features. There are a few more to come.

Next in line, you’ll find that there’s a wild symbol in the game. This is the image of the actual word, ‘WILD’ in a funky font. Wild symbols have the possibility to substitute for all other symbols on the reels in order to form a winning combination. The only icons that they will not stand in for are the scatter and bonus symbols. However, wilds can greatly assist in providing you with winning combinations.

As you’re spinning the reels of this game, you’ll see that there are icons of keys. If three of these come into view in any location on the reels, you’ll trigger the Diamond Rain feature. This basically brings a series of nine matching icons in to view and provides a huge win to add to your balance. This pays out between six times to 500 times your total bet from the triggering round.

You will also be able to activate a Treasure Chest Mystery Bonus round in this game too. This is done simply by bringing three treasure chest icons into view in any location on the reels. This Mystery Feature round will provide you with a pay out of between 50 times and 500 times your total bet in play. Furthermore, if the jester hat comes into view during this round, the profit increases even more.

Other Games with Action

Jewel Action online slot is a pretty nice game, thanks to the unique design and great special features within. There are a few other online slots which feature similar extras and design as this one. For example, check out the Booming Games offering of Freemason’s Fortune. This provides nine pay lines, rather than 10, but it still offers up the three reel, three row layout. There are also 10 freespins available in the Booming Games slot as well. Another one is the Playtech slot with the title of Fortunate 5. While this one has a five reel and three row layout as well as 15 pay lines, wilds can appear on all reels. One extra part of this game is that additional wilds appear during the freespins round. Finally, the very last game that we can recommend is the IGT slot known as Super Times Pay Hot Roll. Wilds can appear on any reel within this game too, although it does contains 20 pay lines. However, the reel layout stands at a 3×3 offering, so this is the same as Jewel Action.