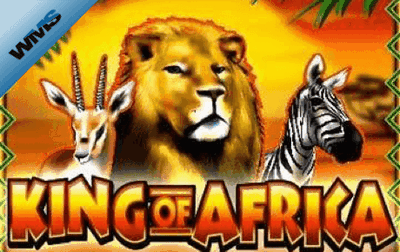 Take a safari adventure in Africa where trees are visible in the background and the thick grasslands of the Savannah where Lions and Leopards blend into the surroundings waiting on prey they can pounce on hide the huge prizes that can be won!
The King Of Africa slot machine is part of the G+ slot series from WMS and follows on from fellow animal-themed slots like the Gorilla Chief 2 slot machine and the Jungle Wild slot machine – but will King of Africa prove to be the best of all?

Pay Extra for the Feature Bet

There is nothing extraordinary about the structure of the King of Africa slot machine as it simply consists of 5 reels and 20 paylines, but aside from the friendly 96% return to player percentage (check out our online slots glossary if you’re unsure what this term means) what is most interesting is the fact you pay an additional sum of money for the feature bet. The bet per payline options range from only 1p up to £5 but the additional feature bet sees you pay 10x the line bet too, therefore the reels can be spun from 30p up to a maximum of £150 per spin.

An African Safari on the Reels

An African Safari would see you take in some quite breath-taking views with memories to cherish forever, but the King of Africa slot machine features a total of nine symbols designed in the style of a Disney movie (the Lion will certainly remind you of Mufasa from The Lion King) with opportunities for huge wins that you’ll never forget!

There are two special symbols – the Wild and the Feature. The Wild is simply the King of Africa logo with five on a single resulting in a 100x win and this can substitute for all others aside from the Feature symbol which is represented by a Tree in front of the sizzling Sun. It’s the Lion who is the King of Africa here as he poses in a powerful stance and he is joined in the wilderness by a Leopard laying on a tree branch at night with the Moon behind him, an Elephant storming towards you, an Impala running rapidly, a Zebra hot footing it across the grasslands, an African necklace, and an African shield which have the smallest payouts.

As if it wasn’t hot enough in the scorching grasslands of the Savannah as the sun beams down, you’ll find the reels on fire when you land three or more of the Tree Feature symbols – and you get lots of assistance to achieve the combination. Each and every time you land two of the Feature symbols you may wish to scream in anguish as if you’re being hunted down by a ferocious Lion, but the reels the symbols appear on are then locked in place and the other reels are respun in order to try and find you that elusive third Tree Feature symbol.

Once you do manage to land the three required Tree Feature symbols you’ll gain access to a free spins mode where you are presented with 8 free spins, but most importantly it sees you play the Hot Hot Penny feature for a shot at winning even more.

Once your free spins start an Expanded Wild (the ginormous Giraffe that will give you neck-ache look up at it) takes up residence on one of the reels and then for each and every other free spin fills a random position – this results in magnificent wins every time!

The animal theme is so popular in brick and mortar casinos, Fixed Odds Betting Terminals in the UK, and especially at online casinos but with so much competition King of Africa simply doesn’t stand out from the pack. It’s only worthwhile playing for the Hot Hot Penny Feature that never fails to result in big wins that could see you jet off on an African safari yourself!