Kingdom Of The Titans 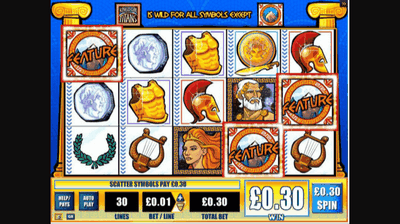 Kingdom Of The Titans Slot Detail

Return to Greek Mythology on WMS’s Kingdom of the Titans
Arguably the most popular feature of all on Kingdom of the Titans is the Spinning Streak option, which can also be found on the likes of John Wayne. If you’re not familiar with the bonus, basically any winning spin will lock the winning symbols in place while the symbols spin again. A further prize is awarded and if you’ve managed to improve your board then the same will happen again, and keep on going until no further prize winning amounts appear.

That feature is at the core of all of the gameplay, but is certainly not all that the slot has to offer. The Kingdom of the Titans logo, for example, is the game’s wild card and will appear regularly on the first, third and fifth reels. The only symbol it can’t fill in for is Mount Olympus, which is the game’s scatter and awards various prizes. Three in view will trigger a single re-spin, while five or more in view will award free spins. These start off at eight spins for between five and seven in view and continue to improve up to between eleven and fifteen icons in view, with a stunning fifty free spins on offer. The Spinning Streak feature continues to make its presence known during these spins and will even build up a multiplier as the streak progresses.

Kingdom of the Titans is a fine addition to Williams Interactive’s range of Ancient Greek themed slots and well worth a few spins here at Mr Gamez, particularly considering that there is no deposit, registration or download required!