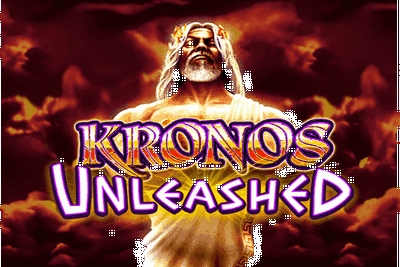 Kronos Unleashed slot games is a 5 reel, 60 payline slot from WMS Gaming that is played on a grid that is 8 rows high. Playable on desktop, mobile and tablet devices from £1 to £400 per spin, Kronos makes his return as he unleashed lightning bolts onto the reels to give you a Lightning Respin feature, free spins and a jackpot bonus – there’s also a Boxing feature where certain symbols can cover the reels for god-like wins.
Visually, Kronos Unleashed is similar to the original, Kronos, and based on the King of the Titans and the god of time – with a flaming background, you will see Kronos stand proudly behind the 8 row high reel set. As you can see, the game is best played on a smartphone device.

Symbols on the reels include A, K, Q and J playing cards as well as bracelets, lions, thrones and Pegasus horses. You will also see Gold Kronos, Red Kronos and Purple Kronos – the latter is the most rewarding giving you 30 times your stake for 5 across a payline. The temple is the wild symbol and replaces all symbols bar the scatter – it appears only on reels 2, 3 and 4. You form wins from left to right except with the Gold Kronos symbol where pays are awarded in both directions.

When it comes to bonus features, Kronos Unleashed online slot comes with plenty – look out for any Kronos symbol of the same colour landing fully on reel 1 as this will trigger the Lightning Respin Bonus feature. Reel 1 remains completed filled with a Kronos symbol with 3 respins awarded.

A minimum of 4 symbols will be added – these symbols are then held for the duration of the feature. The symbols that will appear are Kronos and Power Up symbols. Furthermore, only 1 colour of Kronos symbols may be active at a time and will be the same as the colour of the Kronos symbol covering reel 1.

If 1 or more non-blank symbols land during a respin, 1 more respin is awarded. If a Power Up symbol lands, it transforms into 1 of the 4 special symbols – these are X, Lightning, Arrow and Plus symbols. The X symbol is the active Kronos symbol will fills all open positions adjacent to it. Up to 4 Power Up symbols can transform into this symbol in the feature.

The Arrow symbol adds 1 additional row to the bottom of the grid – each position is covered with the active Kronos symbol. Each time the grid expands, 10 extra paylines are awarded – up to 4 Power Up symbols can apply meaning you can play with a whopping 100 paylines in total on 12 rows.

The Plus symbol sees all Kronos pays increases – any winning combinations formed with Kronos symbols of any colour pay from both left to right and right to left. Up to 2 Power Up symbols can increase the Kronos pays.

Kronos Unleashed slot games comes with a Free Spins Bonus feature which is triggered when 3 or more sun scatter symbols appear anywhere in view – any reel where the scatter symbol covers only 1 or 2 positions will activate the Bonus Nudge feature which sees the symbol nudge to cover up to 3 positions on that reel – this gives you extra wins.

The number of free spins you’ll play with is determined by the Boxing feature – there are groups which contain 1 or more reels with each scatter part of 1 group.

Seem complicated? Once you get playing Kronos Unleashed, you will see it’s simpler than it seems – the Free Spins Bonus feature is good but it’s all about the Lightning Respin Bonus feature where you can get plenty of respins with Power Ups that will give you more active Kronos symbols, extra rows for more pays, symbol pays upgrades and access to 5 fixed jackpots – the Kronos jackpot is worth a whopping 50,000 times your stake! Do you dare challenge Kronos?