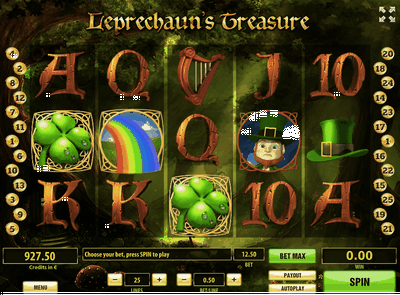 Leprechaun’s Treasure Slot Review & Experience
Another slot brimming with Irish-folklore is Leprechaun’s Treasure. This slot overflowing with Irish luck and jolly Leprechaun’s. There may be many Leprechaun slots out there, but even so, these slots are highly sought after and make for a very entertaining gameplay. Since there are so many available, it does mean that software providers have to ensure that their productions are in a competitive class, regarding graphics, sound-effects, overall entertainment, and potential rewards. Leprechaun’s Treasure has all of the factors needed for it to be one of the forerunners in terms of Irish-folklore themed slots. Sticking closely to Leprechauns’ favourite colour, this slot’s main colour is green, which is used in most of the graphics, videos and symbols. SInce traditionally, Leprechaun’s were said to bury their pots of gold in the forest, a large portion of the game seems to be in search of these hidden treasures. This slot has a traditional 5 reels and 25 paylines, making it a simple slot that any type of player could easily enjoy. Unlike most other Leprechaun-themed slots, this one features a progressive jackpot, and winnings, with some of their large multiplier effects, can be very large indeed.

Leprechaun’s Treasure is produced and developed by Tom Horn Gaming. Tom Horn Gaming was established in 2008 and quickly spread into other games above online slots. Some of their other productions include Casino Table Games, Live Table Games, Jackpot Games, Video Poker, Keno, Bingo and Scratch Cards. The inclusion of all of these different types of games quickly made Tom Horn Gaming a very popular provider for many online casinos.

Leprechaun’s Treasure is an free online slot that is teeming with impressive video and 3D graphics and very Irish sound effects. It includes the very folklorish colours and themes and makes for a very entertaining online gaming experience. As with most Leprechaun-themed slots, there are two different levels of symbol values. There are low-paying symbols which include card value symbols ranging from 9 to Ace. Then there are the higher-paying symbols, which include four-leaf clovers, a leprechaun’s hat, a leprechaun’s shoes, and of course, leprechauns themselves. There isn’t an overabundance of symbols in this slot but that does actually make it easier to play and in a way, does increase a player’s probability of walking away a winner. Leprechaun’s Treasure features both a Wild and a Scatter symbol. The Wild symbol in this slot is the four-leafed clover and can substitute itself in place of any other symbol during gameplay (except for the Scatter symbol – which adds extra bonuses and free spins).

One of the ways the software providers can make their slot more attractive is by adding bonus games and features into their slot, and Leprechaun’s Treasure has not one, but included into it. The first bonus game is “Dig the Gold”. This bonus game is unlocked when a minimum of three pots of gold are landed on a payline. During this round players dig around 15 potential trees, and the pots hidden in the earth, have different cash prizes up for grabs. The second bonus game is called “Follow the Rainbow” and is unlocked when ‘Bonus Game’ symbols are landed across the active paylines. This game adds cash multipliers when players choose one of the rainbow’s colours. Obviously different amounts are hidden under different colours. Both of these additions make Leprechaun’s Treasure a very exciting slot to play.

This slot offers an exciting and rather riveting game plot. It might not have that many symbols floating around but the addition of bonus games and the fact that the Leprechauns in this slot actually try and steal your money from you (which they don’t really, but it does add to the excitement of the game), this is a very adventure-filled slot.

Leprechaun’s Treasure must be one of the best productions of online slots when it comes to Irish-folklore themes. This slot isn’t overly complicated but might be slightly tricky at first with the additions of bonus games and with an opportunity to get an online casino bonus, but this shouldn’t be a problem for new players. Visitors can also discover new online casino bonuses to use it playing this slot. For any player that loves Irish-folklore and mischievous Leprechauns, then this is a slot to definitely check out.