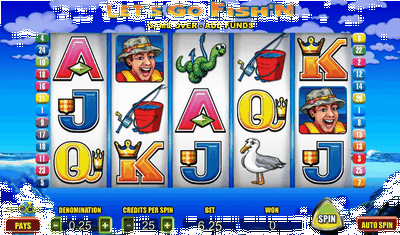 If you’re a player who loves fishing, you’re going to love this online slot from Aristocrat which sees you grab your rod and bait (worms in this case) to take position on a wharf where you’ll cast the day away in the hope of reeling in big wins – with a jackpot of up to 1,250 coins on offer for you to net!
Casting Your Rod

All the fishy action of the Let’s Go Fish’n video slot takes place across 5 reels with 3 rows and there are 25 fixed win lines. You’ll need a license that needs to be paid with real cash to fish these clear blue waters with fees of 25p up to a high limit of £250 available, although if you prefer to play for free you can do so below with no download needed.

If you get tired of casting (hitting the spin button) time and time again, you can make use of the auto play feature which can be set to 5, 10, 20, 30 or 50 spins and while it’s not filled with bonus features, the sole Fish’n feature will see you reel in big wins in an exciting free spins mode!

Catch of the Day

The symbols on this pay table might not be the 3D graphics we enjoy from the most recent online slots but this free Let’s Go Fishn’n slots game was released in 2013 so they aren’t as horrible as some of their titles, although the same horrid sound effects have been included which detracts from the fishing atmosphere you’d expect.

The catch of the day is the Let’s Go Fish’n logo which will see you reel in up to 1,250 coins and it’s also worth noting that it pays any due to it being a Scatter symbol which in turn makes it key to triggering the special Fish’n feature where the biggest rewards can be netted.

Meeting the jolly fisherman who is clearly having a lot of luck in these waters as he has a brimming smile on his face will see you net up to 1,000 coins, spotting seagulls who are feeling peckish will see you scoop up to 500 coins, finding wriggly worms to use as bait or the symbol of a fishing rod leaning against a bucket where all the fish caught will be thrown into will see you reel in up to 300 coins.

Let’s Go Fish’n is all about the Fish’n feature which is triggered whenever you land three or more Scatter symbols on the reels at once. This combination of symbols will see you claim 50 coins for three, 250 coins for four and 1,250 coins for five, however it’s the free spins with Wild gold symbols which makes it most exciting.

You’ll find yourself whisked off to another screen where a line-up of anglers can be seen on a wharf with their rods cast in the water. The characters are called Sunbabe Sally, Fishwife Fran, Sneaky Sam and Lucky Lucy and you’ll notice that is a transparent box in the water underneath each of them.

Trust me, this feature always sees you reel in big wins!

While the Fish’n feature offers the opportunity for pretty big wins, Let’s Go Fish’n is certainly not the best fishing themed slot around as I’m sure you’ll agree with due to the outdated graphics, the stock sound effects, the exclusion of a Wild symbol in the base game and the fact that it has not been mobile-optimised.

Instead of casting your rod in these waters, I’d encourage you to try catching a big salmon on Microgaming’s Alaskan Fishing slot or to try and reel in big bass on WMS’s Reel ‘em In slot instead – both of which boast far superior graphics and bonus features.