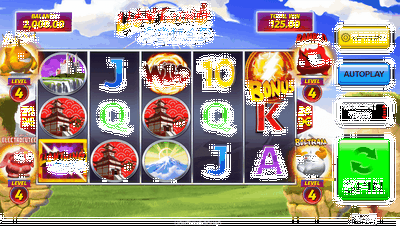 If you’re in trouble and there’s nowhere else to turn then perhaps you should call the Lightning Squad mobile slot – they’re the heroes of this online slot machine from Inspired Gaming and they’re here to battle it out with each and hand out bonus features.

The high value symbols include a white castle, the game’s logo, a tree, a temple and a mountain
J, Q, K and A make up the lower values.

The wild symbol is a ball of fire which will replace all others to form winning combinations except for the lightning strike bonus icon.

This is triggered by landing three of the lightning strike bonus symbols anywhere on reels one, three and five and the first thing that happens is that all the creatures will battle it out to determine which bonus you receive.

There are also two minor features as follows:

If you land two bonus symbols, a third can be added to trigger the main feature. The game’s logo can be added several times to a non-winning spin to create a win.

Lightning Squad is a really engaging slot in which there always seems to be a bonus feature just around the corner
RTP of 94.