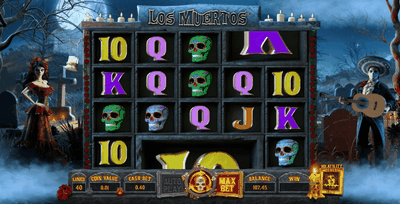 A slot game filled with grinning skulls might sound like a scary idea to some players, but the comic characters of KA Gamings’ Dia de Muertos video slot are a friendly bunch and really nothing to be frightened of. These cartoon cadavers are all taking part in the traditional Day of the Dead festivities in a Mexican setting, across five reels which offer you 720 different ways to line up symbols for a win. Some of those symbols will take you to bonus features like a free spins game, or a fun piñata round where you collect coins from a donkey.

Dia de Muertos isn’t the only online casino slot themed around this celebration, but it’s arguably one of the best looking. The skulls and skeletons have been designed by someone with a real sense of macabre humour and when they become part of a winning combination, they dance around a bit, adding to the comedic effect. The five reels are set against the backdrop of a traditional Mexican village and of course, no slot based in the country would be complete without a Mariachi band playing in the background. Dia de Muertos doesn’t let us down here, with a classic soundtrack that complements the style.

It’s part of a growing range from KA Gaming, who are a Tiawanese developer of online and mobile optimised slots for both the local and international markets. Their games all come with exciting and often unique bonus features and each has been certified by independent testing labs to ensure fair play at all times. So, let’s give a big Mexican wave to the disembodied dancers of Da de Muertos and check out the features of this exciting game.

No Bones About it

As soon as you launch this game, you will notice that there’s something different about the reel arrangement. The outer reels are each three symbols high, while the next two inwards have four symbols on them and the middle reel contains five symbols, giving the whole set a diamond shape. You will also find that unlike most slots where you need to land matching symbols across the reels from the left side, in this game, winning combinations can start from both the left and right sides.

With no paylines to wager on, you simply need to decide the value of coins, which go from just 0. Fifty coins are needed to spin the reels, although free Dia de Muertos video slots are available if you don’t mind playing with no way of actually winning any cash. If you want to see how much each combination of symbols is worth, then check out the paytable, which reveals that a range of colourful grinning skulls will be worth the smaller payouts, while skeleton characters return the top prizes. There’s also symbols of a gravestone, candle and a cactus in a sombrero hat.

A wild symbol is able to act as any of those above if it’s in the right places to complete combinations, filling in any breaks in a continuous run of another symbol, although it doesn’t pay anything on its own.

A woman in skull makeup is the sure to bring a grin to your face when she stops in any three, four, or five places at once. This scatter symbol won’t need to be on adjacent reels and will pay out some massive prizes equal to 200x, 500x, or 1,000x your total bet per spin, depending on how many are seen in a single spin. You are then given 20 free spins which play out automatically, letting you sit back and hopefully watch more rewards come in without having to place any bets.

The staring image of a dead Mariachi player is a special, if slightly creepy, bonus symbol. He’s worth up to 200 coins when he stops across the reels, but any three or more of this symbol will also start the Pinata bonus feature. You’ll see a donkey piñata in a death mask and all you need to do is whack it until coins come showering out. It’s a quick and simple round, but also fun and has a guaranteed payout at the end. Ole to that!

You can raise the stakes to a huge high limit of 4,000. KA Gaming slots all use a similar set of control buttons that lets you adjust you wagers by way of plus and minus tabs and they also share an unusual way of activating the Autoplay function.

It’s not immediately obvious, but if you hover the cursor over the Spin button or hold it down on the mobile optimised version of the game, you’ll reveal the Auto options and you can then get the reels spinning on their own for as many times as you like.

Slots based on Halloween and other macabre celebrations include the Day of the Dead video slot from IGT. It’s got a similar collection of skeletal characters who appear on similar a hexagonal reel set where there’s 720 ways to win. It also has the Multi-Way Xtra payout formula that you qualify for with a 50-coin wager. It pays out multipliers when you have several examples of the same symbol on the reels. An outstanding bonus round can grant up to 96 free spins and if these get retriggered, you could have as many as 240 free games coming your way.

Oryx Gaming have their own Dia De Los Muertos bonus the market.

A Treat From South of the Border

This is definitely a fun slot machine that takes a humorous look at the traditional celebrations. It may be a slightly macabre sense of humour, but we found it enjoyable anyway. The unusual reel layout and 720 ways to win make it stand out from other games and of course, the features are pretty outstanding as well.

Free spins and the enjoyable piñata round can lead to some big paydays, but it’s also the little things that we like, such as the skeleton hands that you click to move between the pages of the paytable. It’s touches such as this that indicate the level of care that’s been taken in developing this outstanding slot machine.

Check it out for yourself at some of the trusted, reliable and safe online casinos that carry the games from this popular developer.