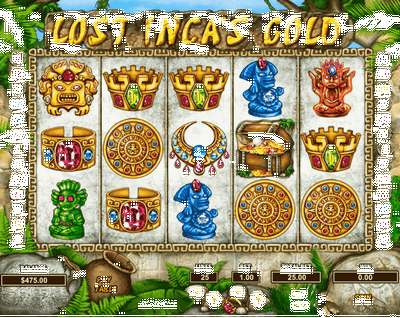 Top Game and it includes a top jackpot of ,000, with features like Free Spins, scatter and wild symbols.

The Incas are a well known Ancient civilization that has impressed the world with the things they’ve accomplished. Their culture was astonishing, and you can get a glimpse into it just by looking at the symbols which were used on this slot. The reels are surrounded by a jungle, while the symbols include Jane (the main character of the story which is also the wild symbol), four different types of Incan statues, five different types of jewelry, the scatter symbol (a map) and the bonus symbol (treasure chest).

The player is allowed to place bets of up to 25 coins, which means that each payline gets only 1 coin. The coin value is . The player can place bets during each spin which are between . The top jackpot of the game is 8000 coins, or ,000 cash.

Jane, the main character of the slot, is also the image used for the wild symbol. Just like any other wild, Jane will take the place of other symbols, in order to create winning combinations. There are two exceptions, the scatter and the bonus symbol, which the wild can’t substitute for.

The symbol with the map is the slot’s scatter. This symbol gives out free spins to the player, if at least three maps appear on the reels. With three scatters, the player receives 5 spins, while four scatters bring 10 spins and five scatters bring 20 spins for free.

The game’s bonus symbol, which uses the treasure chest, will activate a bonus round, but only if at least three of them appear. The more treasure chests contributed to the bonus round, the bigger the payout potential. With three of these bonus symbols, the potential prize is between 10 and 95 credits. Four symbols can bring a prize between 40 and 495 credits. The maximum number of five Bonus symbols can award a prize between 100 and 950 credits. The game itself consists of three idols, and the player has to pick one. The idol will reveal the prize.

It’s an interesting game for those that enjoy a bit of history, or those that have loved the Indiana Jones movies.