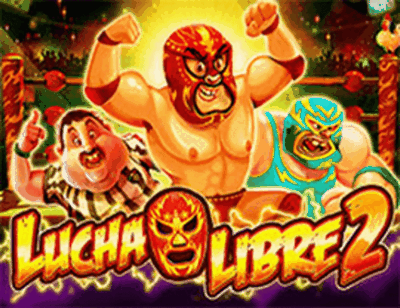 The luchadores are back and they’re packing a punch like never before, get ready for more macho wrestling adventures in the highly anticipated Lucha Libre 2 bonus. After hours of fun and hilarious fighting action in Lucha Libre, this fiery sequel follows Taco Malo as he challenges a new competitor – the formidable Nacho Friend. Released by reputable online slot provider Realtime Gaming, the company that created world-renowned slots Achilles, Cash Bandits and more. This funtastic slot release at Slotastic released in May 2018 to celebrate Cinco de Mayo promises hours of long-lasting slot action for all casino players.

Grab some popcorn and watch the luchadores in the audience or step right into the ring to experience the full capacity of the Lucha Libre 2 slot. Show off your high-flying manoeuvres and battle your opponents to take home the Lucha Libre title and be crowned the champion.
The fun doesn’t need to stop, both Lucha Libre and Lucha Libre 2 casino slots can be played anytime, anywhere with the advanced Slotastic mobile casino
If you’re on the move, play in portrait or landscape mode and experience advanced graphics and sound effects on-the-go.

Are you ready to rumble? In the ‘Time to Rumble Feature’ pick your best fighting move to defeat your opponent and conquer, if you’re successful free games will be added and multiplied. To trigger this fighting feature you’ll need to reveal 3 or more scattered ‘Mucho Mayhem!
The next big feature available in Lucha Libre 2 is the ‘Fist of Fury Feature’, where random Fists of Fury free spins are awarded after free games are completed and instant Fists of Fury are played before free games.