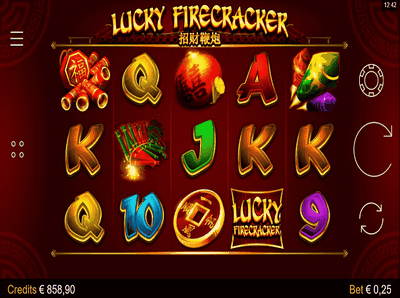 As the name suggests, this is a game themed on historic Chinese fireworks, with traditional firecrackers, sparklers, rockets and lanterns all featured. Beginners and more experienced players alike will be quickly pulled into a fast-moving game that offers multiple ways to win and is especially generous when it comes to free spins.

Built using Microgaming software, this game has the slick look and great graphics we have come to expect from this developer. Perhaps unsurprisingly, it is quite heavy on the red and gold theme.

It is fun and engaging to play and the fact that it does not follow strict paylines makes it interesting
what’s more, the generosity when it comes to the free spins makes it seem exciting throughout.

This game has an RTP of 96. This is an industry term that unfortunately does not mean you are guaranteed a win almost 100 per cent of the time – it is not that lucky a game!
of course, this is an average only.

The graphics on this game are pretty nice, as you would expect from Microgaming.
however, the symbols featured come to life nicely and the overall impression is slick and sophisticated. This is no mean feat, as it could easily come across as dated and a bit naff
instead, the team has managed to put a modern spin on a pretty old-school concept.

The reels are set against a rich red backdrop, with gold lettering and Chinese symbols throughout. The symbols on the reels include a trio of firework rockets, a red paper lantern, traditional firecrackers and a golden medallion.

Fireworks obviously originated in China many centuries ago
Chinese culture has long associated certain symbols with good luck. In this game, these two elements have been combined to bring the idea of fireworks and luck together.

How to play Lucky Firecracker slots

This is a fairly straightforward and intuitive game to play. First, select your coin levels and the amount you want to bet. Coins are worth between 0. There is also a quick bet feature where you can choose from pre-set amounts to bet to save a bit of time and hassle: 0. This game also has an autoplay feature where you can set it to spin automatically either 10, 25, 50 or 100 times.

Once all these elements have been selected, simply spin to match between two and three symbols to win.

This is a medium volatility game, which basically means you are more likely to win smaller amounts regularly than to win one large amount.
what’s more, regular smaller amounts can add up nicely!

How to win at Lucky Firecracker slots

This game is all about the free spins when it comes to bonus features. Match three, four or five of the scatters and get 15 free spins. You also get your scatter wins multiplied by your total bet. There is also a wild, which is the game symbol written in gold. This is only available on reels two and four.

A lot is down to luck, but it is always worth playing for free first to get to know the game and work out how best to play and to hopefully win.

This game is fairly generous, with the maximum amount you can win a respectable 90,000.

There are great free spins on this game, which are triggered by matching at least three of the medallion scatter symbol.

This game has been optimised to play on all mobile devices, so it can be enjoyed anywhere and anytime.

There are so many Chinese-themed games out there. Gung Pow is a good one, as is the Fireworks Master slot.

Yes, you can play this game for real cash in a wide range of places.

Can I play Lucky Firecracker in NZ$?

You certainly can, and at a whole host of online casinos.

It is available at loads of casinos, such as Sloty, the Spin Palace desktop site, Casinoland and Casimba

Does Lucky Firecracker have a Free Spins feature?

Yes, this game has a great free spins feature. This is triggered by matching at least three scatters and includes multiplying your bet.