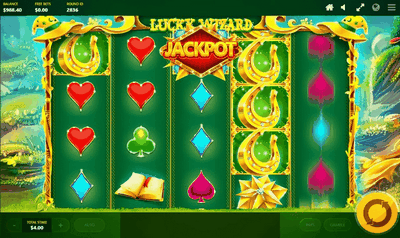 Fortune and magic are 2 of the favourite themes for online slots developers and they come together in Lucky Wizard, a 5 reel, 40 payline game from Red Tiger Gaming. Available on desktop, tablet and mobile, it offers plenty of chances to conjure up a jackpot courtesy of an impressive range of base game mini features.
As with all of Red Tiger Gaming’s slots, Lucky Wizard casino app is well designed – it comes with a jaunty fantastical soundtrack and slick high definition visuals. Set against a forest backdrop, the reels include playing card suit symbols alongside a book of spells, wizard’s hat, golden star and a golden horseshoe which appears stacked.

The golden 4-leaf clover is the wild, replacing everything bar the scatter and awarding payouts of up to 800 coins.
There’s also a Lucky Win symbol – when this lands on the middle reel, you’ll be awarded a special cash bonus.

Land 3 of the Lucky Bonus symbol anywhere on the reels and you’ll trigger the Lucky Bonus feature which is the game’s main feature. Once active, you’ll be presented with 6 potion bottles – pick 1 to reveal how many spaces the wizard will move. Ideally you’ll see again following the number as you’ll get another pick. Keep choosing the potion until you find one that just contains a number.

The Lucky Wizard casino app can also appear at random on the reels, sprinkle some magic dust and in the process trigger some mini features.

Lucky Reels feature – all of the lower value playing card suit symbols are removed from the reels. With just the higher value symbols remaining, it’s that much easier to create a decent winning combination. Lucky Nudges feature – the wizard nudges the reels into a winning combination. Lucky Swap feature – lower value symbols are exchanged for higher value ones. Random Wilds feature – with a wave of his wand, the wizard adds a selection of wilds to the reels at random.

Lucky Wizard is a nicely designed slot boasting a decent range of features – the big red flag here is the lack of free spins. That aside, the other extras are decent enough with the cash trail bonus offering some solid winning potential. The mini features don’t hit that regularly but certainly help things along in the base game. We found the variance to be in the low to medium range.

It’s not the most exciting slot you’ll come across but if luck is with you, the Lucky Wizard online slot can still conjure up something special. If the theme is appealing, I highly recommend WMS Gaming’s Wizard of Oz Ruby Slippers which is superb.