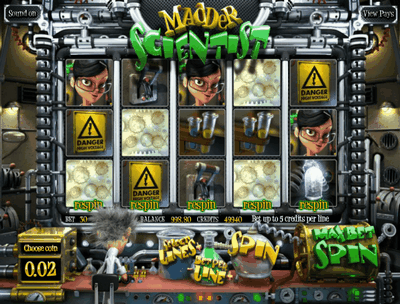 The crazy German scientist from Mad Scientist is back and madder than ever in this BetSoft online slot. You can play this free slots game right here or search for other free games to try out.

Betsoft always introduces high-quality graphics and animations to its online games and Madder Scientist slot games is no different. There is a captivating introductory sequence featuring the crazy scientist and a rather worried-looking rabbit, with the scene then opening up in the scientist’s lab.

The reels are surrounded by all manner of pipes, switches and tubs, with chemical jars positioned at the bottom. On the reels you will find symbols featuring the chemicals, an assistant, a rabbit, a danger sign, a microscope and the crazy scientist, which can all be used to form winning combinations on the paylines.

The music adds to the mad environment with a soundtrack of slightly odd classical tracks that appear to fade in and then out again alongside the action.

You will also find all the same bonus features and respins on the mobile version of Madder Scientist, which is compatible with your mobile and tablet so that you can carry on playing on the move.

Madder Scientist casino app is played with five reels and a choice of up to 30 paylines – the more lines you play, the greater your rewards will be. Individual payouts appear to be relatively small but these can be combined on a single spin to increase your total rewards.

This online game comes with a number of bonus symbols including the carrot, which is used to unlock the break-out round. If you get three of these images across the reels, you will be transported to another screen and you then have to select from three beakers containing different coloured chemicals.

There are two rounds and you will be awarded with credits depending on the beakers you choose. The scientist then mixes them together to create a gold or gelatine carrot, which gives you further credits.

The switch symbol plays as the wild. If you get three of these, one reel will turn completely wild and reward you with five respins to give you further winning chances. If you get further switches during the respins, you will get another spin added.

There is also a simple bonus feature that is activated by the chemical beakers on the first, third and fifth reels with ‘click-me’ on them. By clicking on these beakers, you will be rewarded with an instant prize.

Madder Scientist casino slots has a fantastic respin feature that gives you the opportunity to respin any single reel after each turn, the cost of which will depend on how high your chances of winning are. This adds another dimension to the game and provides more opportunities to be rewarded.

Madder Scientist benefits from some stunning graphics and a unique theme that makes it a must-play slot. The bonus features, wilds and respins create many ways to win as you assist the scientist with his experiments.