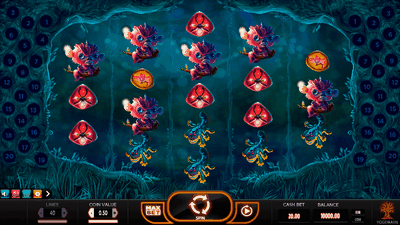 Magic Mushrooms” slot machine, released on the 1st of July, 2014 by Yggdrasil Gaming, will transfer casino players to the magic forest, where they will have to collect the same combination of lines on the left or right side of the screen. Simple rules of the game are complemented by an excellent set of special features, which includes several options for wild symbols and free spin packs. The field for betting in the “Magic Mushrooms” is a non-standard combination of drums 3-4-5-4-3 on which images of mystical creatures rotate. All of them bring awards with individual payout ratios, with the exception of the Free spins snail, which opens access to the bonus mode. Analyzing a set of characteristics of the “Magic Mushrooms” slots it’s easy to notice fairly high theoretical returns that are responsible for long-distance profits. In connection with this circumstance, the optimal strategy for playing the slot will be small and medium monetary units.

The blue mushroom on the 2nd and 4th drum of the “Magic Mushrooms” gambling machine activates multipliers, which increase the amount of profit. The exact coefficients of the multiplier function of the slot selects randomly in the range of x2-x10 and applies them only to the current round. Another addition to the functions of the online slot appears on the central column in the form of fly agaric, which spreads to the field other alternatives, which includes the usual Wild and Multiplier. The maximum number of such images is limited to 4.

The pictures on the screen are lined up according to the principle of cells of honeycombs. This happens for the reason that only three symbols are visible on the extreme drums, on the second and fourth – four, and on the third – five. To form a winning chain, three, four or five identical pictures are required. They should be in close proximity to each other on the active line, starting with the first drum or the latter in the opposite direction. At the same time, on each side only the most valuable sequence is paid on the line. The amount of payment is determined by multiplying the bet on the line by the combination factor specified in the rules. On a long game segment, the “Magic Mushrooms” slots game gives 96.

In fact, in the five-drum video slot “Magic Mushrooms” provides twenty lines (you will find a scheme of their location in the rules). But, since the combinations on them are formed from two sides (from right to left and from left to right), it is considered that there are forty of them. The bet on each of them can be from one cent to two euros, and for a round it is allowed to bet up to eighty euros. In this slot there are special symbols, additional multipliers, free spins and other options. The Yggdrasil Gaming Company did not enter game for the chances.

On the bonus part, the “Magic Mushrooms” slot machine offers only free spin packs that are played at a bet equal to the previous value.

One can find “Magic Mushrooms” by Yggdrasil Gaming in different online casinos within the following variations:

Magic Mushrooms” slot is a game with eight ordinary pictures are used. These are fabulous animals, as well as insects in transparent pebbles. They can go on drums in strips. In addition, there are three types of wild symbol, representing the very magic mushrooms. None of them is paid for itself. They are needed in order to replace other images, if necessary.

Multiplier Wild appears on the second and fourth reels, replaces pictures and increases payouts by an additional coefficient from x2 to x10

Spreading Wild can be seen only on the middle drum. It also replaces other pictures, and also adds to the random places on the screen from one to four additional “wild” characters.

Besides three Wild, in the slot machine “Magic Mushrooms” there are Free spins (pink snail). It appears in all positions. From two similar pictures, simultaneously appear on the screen, free spins begin. They will be from two to seventy-five, and they are prolonged. In these rotations, more Wild symbols appear on the reels than in normal spins.

All actions take place in a forest full of mysterious animals and magical phenomena. The goal of the player is to collect unusual mushrooms, which provides generous payouts. They are only three species, and all of them are wild symbols that are not so common (like real mushrooms in the forest). But they are probably familiar with other inhabitants of the forest – a happy fat toad and smiling salamander on the whole mouth. The monkey did not have enough for the mushroom dinner, so her mine will make you smile. Unusual interface, interesting features of special characters, excellent graphics, to the details of a thoughtful control panel – agree, this is enough to consider this video slot an excellent game.