Magic Of The Ring 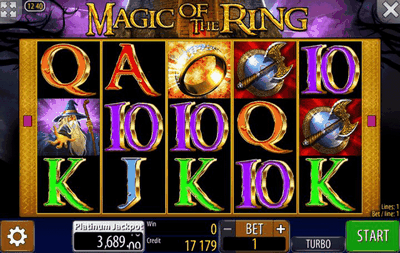 Magic Of The Ring Slot Detail

Magic of the Ring Slot Review

Magic Magic Of The Ring slot machine into the category of mythical sets and sends players on a quest in search of a magical gold finger band. The adventure takes place on five reels with twenty play lines splashed on them, which can accommodate stakes between 0. An old wizard is included in the playtable to guide punters and acts as the most valuable of the standard icons. The magical ring, however, is the real prize and awards up to 40 times the total stake and free spins while playing both the wild and scatter. This Magic of the Ring online slot review covers how to overcome dangers along the way with a simple gameplay to get to the ring and claim its riches.

About Magic of the Ring Slot

Magic Magic Of The Ring slot games is one of Wazdan’s earlier works that was released in 2013. The aged nature of the slot shows in its graphics and animations. The game is a display of the early era of 3D imaging, which primarily reflects in its colourful icons that have decorative gold elements. The symbols sit on a black playtable, which is outlined by golden-brown edges.

The left and right sides hold tiny coloured boxes that indicate the pattern followed by each of the twenty bet lines. The backdrop leads into the night, which is decorated with a dark blue sky, creating silhouettes of tree branches. At the centre sits a giant castle that holds a fiery room as comets shoot from its sides and light up the night sky. Soft music plays as gameplay proceeds, but it can be muted if silence is preferred.

Wazdan slots abide by a similar approach of gameplay, which is the same in this game too. The process accommodates newbies and seasoned punters with a two-step procedure that involves the selection of a stake followed by the spinning of reels.

Three-line button – launches a tab with different settings such as Full-Screen Mode, Double Screen Mode, Big Win Presentation, and Advanced/ Unique Gambling. Speaker – controls whether the background music is on or off. Bet values – is featured as a panel with different stake values between 0. The wagers can be navigated using the (-) and (+) toggle keys or punters can click on their desired bet. Play button – serves as the manual spin button. Curved arrows – activates the autoplay function, but the spins cannot be preset.

The main rewards in the game are the character combinations, which grant credit wins. These payouts come by when two to five of the items fall on a payline from the left. The characters must be on adjacent reels, and only the most valuable combo is paid per win line. Each combination has a designated value with the poker face cards offering the small wins, which makes them the most likely to land on the grid. These symbols also pay for three to five of them in a combo. The icons linked to the theme are rare, and they offer bigger payouts.

The displayed wins in the paytable are for the minimum bet of 0.

Bonus Features in Magic of the Ring Slot

The Magic Of The Ring online slot depends on more than just combination payouts to award punters.

After any payout, free online Magic of the Ring slot machine allows players the chance to double their wins with a standard gamble game. Once activated, the bonus redirects gamers to a second screen where they have to guess the colour of a hidden poker card. The round can be played as many times as the correct answer is given. However, answering wrong not only takes away the collected bonus payouts but also the wins used to activate the round before being sent back to the base game. The gamble game is only active when manual spins are used. Wins collected using autoplay and free spins cannot be gambled.

The golden magic ring is the centre of attention in the Magic of the Ring slot game since it serves as both the wild and scatter. Since it is the only bonus character, it can replace all others to complete the highest possible winning combination on a bet line. It also awards winnings of its own for combos of between three to five of them. However, unlike regular icons, the magic ring can appear on tiles that do not sit on a payline and still activate winnings. Three or more of the scatter symbol in Magic of the Ring slot game also offer 10 free spins. The freebies play with 20 play lines as well, which hold the same value as the triggering round.

It is an excellent wat to play Magic of the Ring slot online for free if you just start to explore what the game has to offer. The demo version is accessible on our site with no registration. The game uses fun coins, which means deposits are not necessary either.

Magic of the Ring online slot is available to play using real money as well in Wazdan online casinos. When choosing an ideal gaming site, it is recommended to check their legitimacy before creating an account and depositing cash. Also, claim any bonuses that can be used in the pokie from no deposit to reload offers.

Magic of the Ring slot machine is a credible game since Wazdan provides it. The software developer holds licenses from the UK Gambling Commission, Curacao eGaming, and Malta Gaming Authority. These firms assess the fairness and random nature of the developer’s games, including the slot machine Magic of the Ring.

Online Magic of the Ring slot machine has a steady Return to Player rate of 96. These rates make it an ideal title for small spenders that do not mind small but regular payouts. However, these metrics cannot be used for accurate predictions of the gameplay results.

Free Magic of the Ring slot machine online is a traditional game in many ways from its few but impressive bonuses and dated imaging. Therefore, it appeals when looking to indulge in traditional video slot gameplay. Nonetheless, it is widely available on both PC and mobile gadgets.