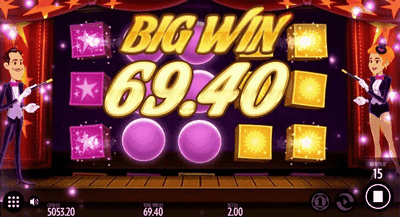 Are you ready to take part in a vintage style magic show, with the possibility of taking home some large cash wins? If so, then you owe it to yourself to check out Thunderkick’s Magicious bonus, as players are given a front and center seat to a magician and his assistant, who are primed to offer up some large cash prizes for spectators.

Magicious is a 5 reel, 10 payline video slot that features a theme of a magic show. The game takes place on stage, with the magician standing on the left side of the reels while his assistant takes the right side. The game’s symbols include a series of cubes, which are made up of sun, moon, star, and planet symbols. There are also a number of yellow and red stars, which offer up a series of boosts to players. Feature wise, Magicious contains wild symbols, expanding wilds, free spins, and stacked symbols. The game also boasts a RTP percentage of 97.

Magicious slot games can be played on both desktop and mobile devices, but I ended up only giving the game a spin on my computer. The game does play quite nicely, and I spent about 20 minutes playing the game as I wrote up this summary. The game’s visuals aren’t the best that I’ve ever seen with the magician and his assistant standing like statues at the edges of the game until you win something, but they certainly fit the theme. Thunderkick has a history of putting out some very feature-intensive games, which makes Magicious feel a bit light as there isn’t a ton going on. Still, there will be a number of punters who enjoy this game, given the high RTP percentage.

Do I recommend Magicious to players? Not especially, but I certainly think there is something here that some players will love. The game is a bit too simplistic for me, but feel free to spin the reels to see how you feel about this game.